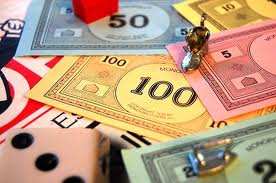 I try to avoid playing Monopoly. Not just Monopoly, but any board game that includes the kind of setbacks like “Go to Jail” that may send you back to the first step of the contest.

You know, so many of us spend our lives under the oppression of a board-game suite of rules.

We allow our missteps to immobilize us. A momentary collapse or indiscretion becomes a destination instead of a delay. The older I get, the more I realize that the greatest challenge of the spiritual journey is grasping the truth that our shortcomings, our failings, and our mess-ups do not have to send us back to square one.

And that is simply an enormous, debilitating lie.

Let’s just quickly look at the people we call “heroes” of the Bible:

Abraham was often motivated by fear – even to the point of lying about his wife; Moses was certainly not courageous when he murdered a soldier and fled Egypt, or when he pleaded with God to find someone more qualified to speak with the Pharaoh. Jonah ran away from God’s message; Esther had no intention of marrying a king and feared for her own well-being; and Elijah, a man who witnessed God bring down fire from the sky, was quick to run and hide in a cave when the chips were down!

And read the genealogy at the beginning of the book of Matthew. The list of the people included in Jesus’ family tree is full of liars, adulterers, murderers, a prostitute… people we’d consider quite “disreputable.”

Whenever you’re tempted to feel like you are too broken or just too “messed up” to fit into God’s plans — I’d encourage you to go open up to the pages of the Bible.

There we find THE most important characters in God’s great Story of Redemption are never strangers to failure and disgrace. Because the true spiritual journey doesn’t work like a board game. In fact, it sure does appear that God might even prefer to use the “messed up” players, the “spiritual JV team,” the outsiders, the people that may never fit the mold as a “reputable church-goer.”

To put it plainly, the Bible is the greatest reminder that, unlike us, God is never as concerned with where we have been or what we have done as he is with where we are going.

Think about this truth today: maybe our most formidable problem isn’t that we are too flippant about sin and failure; maybe it’s that we don’t take God’s forgiveness serious enough!?

Sin and failure aren’t the end of your story (that’s what Easter is all about) … in fact, no matter where you are today or what you’ve done… I think God is longing for you to hear His voice:

“May you get up, shake the dust off, bandage up those scrapes, ‘get out of jail,’ (grab a crutch if you have too) and get moving toward Me.”

If the Bible’s most prominent heroes had lives full of scandal yet transformed the world around them by their willingness to follow Him – maybe, we can embrace that same path.