My Afterward to Dream Again by Isaiah Austin

Dream Again, the remarkable story of Isaiah Austin, will be released in several days.  I am excited for the world to hear the story behind his courage and faith… Here is an excerpt from my “Afterward” and why I believe everyone needs to read my friend Isaiah’s inspiring story: 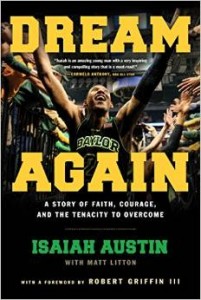 Basketball has been a huge part of my life since I was very young: as a player, later as a coach, and today mainly as a fan and father of four children who enjoy the game. So, I enthusiastically began this project already familiar with Isaiah’s story and an admirer of his grit and determination as an athlete (and a person). I believed Dream Again would not only have a positive impact on readers, but would change (and even save) the lives of people who have to pick up the pieces of their own broken dreams…

Before I first met Isaiah, I was told that Marfan syndrome had left him, in essence, with a “heart condition.” When I first arrived at Baylor’s gym, I watched Isaiah, the most talented basketball player on campus (likely any college campus), who was still grieving the recent news that he would never play ball again, on the floor wiping up his teammates’ sweat during drills, running to grab water for them during breaks, pulling the younger players aside to encourage them, and setting the overall tone with his intense presence. I got to know a young man who is committed to being a servant leader and whose optimism and sense of humor lifts up everyone around him. I don’t know what challenges Marfan syndrome will bring him in the future, but let me tell you what I learned about Isaiah Austin’s “heart condition”: his heart is full of more joy, passion, and genuine faith than any young person I’ve ever met.

I am hopeful, no matter what adversity you come to face in your own life, that Isaiah’s example will inspire you with the faith and tenacity to “dream again.”