One of my best friends introduced me to the concept of an “elevator speech.” 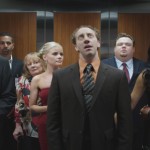 He is a successful executive who works at a big firm in town.  I talk to him often about the joys and miseries of teaching and writing and he explains what it’s like to work in his world (a career that actually pays a livable salary).

As he explained the idea, I began daydreaming about all I’ve “accomplished” on an elevator:

I’ve jumped up and down by myself. I’ve pushed all the buttons like Buddy the Elf. I’ve had an early morning cup of coffee, a late evening Guinness and several McDonald’s sandwiches on elevators across America. I‘ve kissed a girl, nearly had a panic-attack in a crowded elevator, hugged my kids, dusted sand off my shoes, nearly suffocated from some lady’s really strong perfume, danced to “elevator” music, and almost blacked out in a hospital elevator. Come to think of it, I have even hidden from hotel security – all on an elevator.

But, I have never, ever given a speech in an “elevator.”

I recently had a consultation with a publisher about another author.  (Yes, I rode an elevator to get there). At one point during our conversation, the acquisitions’ editor turned to me and asked, “So, what are you working on?”

This was my chance…