“Cut from the Team” (from New York Minute Magazine)

It was a steamy summer early morning right after the bars had closed. A disheveled thin man, stylishly unshaven and wearing a concert t-shirt, closed the door of his car and approached the window. A sense of dejection hung to his persona and seemed to draw the cigarette smoke he was exhaling from his mouth down around his shoulders like a thousand pound weight. He staggered a bit, maybe from having a few too many drinks, or possibly from the malady of rejection.

It was obvious that he was having a terrible evening.

I looked at him through the glass and identified him immediately. Without making eye contact, he reached for his wallet. “Can I have a pack of Marlboro’s?” he asked. It was him, I was sure. Curiously, he didn’t appear a day older. I stood there evaluating the situation, reaching up for the cigarettes and scanning them across the register as he studied the concrete beneath his feet. I wondered for a moment what bit of bad news had befallen him. 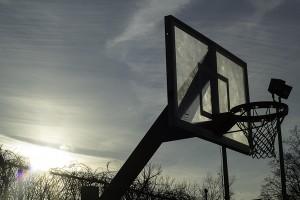 He seemed desperately in need of a good word.

I considered it for a minute as I read him the total. I was a college student home for the summer, and decided to work night shifts at a friend’s store so that my days would be free to play ball. He shuffled through his wallet for the cash, never looking up.

As he pushed the dollars into the tray I decided to speak up, “Is your name Lawayne?” I asked. He slowly peered up at me and reluctantly muttered a guttural “Yup.”

It had been ten years since I had come face to face with Lawayne in a white hallway lined with red lockers and fluorescent lights after a particularly hard basketball practice. I was a fourteen year old freshman in high school who had made it through the first three rounds of basketball tryouts. At the time, he was a college senior that had just finished his eligibility. He could dunk and shoot and I was in awe of him. I don’t remember the others in the hallway with me that day. I just recall the bad news…

Read the rest of the post by clicking here: New York Minute Magazine: Cut from the Team.