I saw Jason Sudekis, one of my favorite SNL personalities, on a talk show wearing some throw-back AJ’s with his suit.  It was pretty stylish.  I’m four-decades in now, so when I say “throw back” Jordan’s – well – it means pretty far back.

I went out the next day and found a pair of the original Air Jordan’s: not the black and red, but the navy and grey that the Georgetown Hoyas must have worn in the 80’s.  I bought them. I think they look legit with a shirt and tie. SNL stars aside, I suppose even after all these years that slogan about #23 still bounces around in my head. I still want to “be like Mike.” 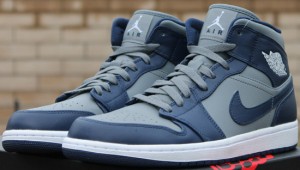 character-flakes and flares and became painfully conscious of how indentured we all are to “celebrity.”  The folks on the big stage carry a lot of weight… I began to examine the luminaries on my feed: I follow one guy because he has hip bands on the cover of his magazine.  I follow another because he has some cool ink and seems to be the antithesis of his televangelist daddy. I follow the one with hipster glasses because almost everything he says resonates with me. I even considered that I follow others because they seem to embrace whatever political agenda’s fit best into my version of the Gospel.

But, I don’t know any of them.

I suppose we spend a good deal of our lives wanting to “Be like Mike” (or whatever our version of “Mike” is) and it seems we are too often guilty of only looking up to the folks on a “platform.”

And then I thought of a Mike that I know.

My friend is a recovering alcoholic who hasn’t had a drink for ten years.  He works as the plant manager for a large church up north which means he spends a good deal of his week cleaning bathrooms and carrying out garbage.  Mike also runs the food bank. He’s there in the lobby for every service.  His smiles, laughter, and joyful presence probably make the facilities more attractive than his meticulous scrubbing of the lobby floors. When Mike isn’t at church, he volunteers to drive a truck and carry couches and dressers for a non-profit ministry that delivers furniture to victims of domestic violence.

Mike doesn’t speak on Sundays.  He doesn’t own a Twitter account.  He’s never written a book, recorded a record, or been on television. I’ll never see him on a talk show sporting AJ’s with a tie. He isn’t a professional athlete or doesn’t possess any kind of gravitas… Mike definitely has no “platform” and most likely, he never will.

If I am really honest about it, Mike does not do much that we “celebrate” in our culture.

When I look at the life of Jesus as recounted in the Gospels, I find that he wasn’t a fan of celebrity at all.  In most cases he avoided the limelight. However, it was always the “religious” guys on stage that outraged him the most. His harshest words were leveled toward the Pharisees (the big-time-religious folks of his day) for praying on street corners, drawing attention to themselves, constantly wanting to earn the praise and recognition of others. Jesus had no patience with them. He commended the servants whose work and sacrifice went unnoticed… the people that wouldn’t garner a lot of “follows” like the woman who gave the very last of what she had to the synagogue in obscurity.

I closed my Twitter feed and looked to the floor at my new AJ’s…  and I considered my friend.

The Mike I really admire isn’t a celebrity.

If I am going to aspire to “be like” anyone today I thought prayerfully… let me be like my friend Mike.