Climbing Mount Kilimanjaro (The Power of our Shared Story)

We all offer our own unique and essential part of a larger story. But, this is true of every great quest. Think about your favorite stories: Frodo does not set out on his own, he travels with the Fellowship. Peter may be High King of Narnia, but not without the help of Susan, Edmund, and Lucy. Harry Potter needs Hermione, Ron, Luna, Neville, and Ginny along the way. Can you imagine Hannibal without Face, B. A., and Murdock? Shadrach without Meshach and Abednego? Gideon without his three hundred? Each of these characters play a role in a larger adventure that is not just their own; their journey is shared. From the earliest moments of the Bible’s Creation story, we are reminded that it is not good for man to be alone. And yet many of us travel a solitary path, which simply doesn’t seem to be the best choice. 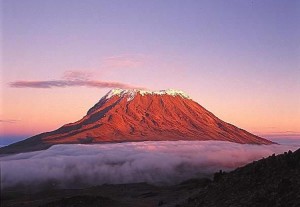 Did you see the movie 127 Hours, starring James Franco? It is the true life story of hiker Aron Rolston, whose arm was trapped beneath a boulder while hiking alone in Utah. After five days, he gathered the resolve to apply enough force to his forearm to break it. He then severed his own arm with a dull knife, fashioned a tourniquet, and was able to make it to safety. Just before the closing credits of the movie it explained that Ralston now makes a point of leaving a note whenever he goes anywhere alone.

I’ve read that there are rules to tackling such a feat. The first and foremost is that no one can ever climb alone. Mountain climbing offers plenty of challenges: logistics, setting camp, the possibility of avalanche, frostbite, illness.

I keep a copy of Hemingway’s short story “The Snows of Kilimanjaro” around when I write. To me, Ernest Hemingway was the quintessential individualist. He wrestled bulls, worked as a war journalist, climbed mountains, hunted on safaris, always romanticizing the power of human beings as individuals and yet history tells us died by his own hand, a man that seemed very alone.

Hemingway’s main character in the story is a writer named Harry who is also very alone at the end of his life. Harry is agonizing about all of the unique and wonderful people he met, yet did not take part in their important stories. It is a depressing tale of loneliness and isolation from an author who believed so famously about the power of the individual. The theme of the story seems similar to the way we operate in our culture: we live as rugged individuals in stories that go unshared. Hemingway’s life and his unique short story character remind me that I am not alone, but am playing a small but important part in a much grander story.

I am drawn in by the terrifying appeal of the mountain in Hemingway’s tale. When you are scared of heights as I am, any mountain sounds like a formidable adventure. Mount Kilimanjaro is not even close to one of the tallest in the world standing at only twenty thousand feet. But it is the tallest in Africa and that is good enough for me.

Hemingway’s character is a storyteller. At the end of the “The Snows of Kilimanjaro,” Harry envisions a plane that has come to take him to the top of the mountain. He is faced with the dreadful reality that he will arrive at his destination with his work unfinished. The stories of so many important people he has come into contact with will ultimately go untold.

Our stories are not just our own. We have a responsibility to reveal our location on the path for the benefit of others.

The big-time church leaders of the day were so threatened by the early disciples and their nomadic spirituality that they called them before the religious court and warned them that they were to never again to speak or teach in the name of Jesus. But Peter and John would have none of their directive; they understand they are not alone in the story, “Whether it’s right in God’s eyes to listen to you rather than to God, you decide. As for us, there’s no question–we can’t keep quiet about what we’ve seen and heard” (Acts 4:19-20).

Because of their willingness to carry that message, tell the story, and be witnesses with their lives, the traveling party would grow: three thousand one day, five thousand the next, and now down through the centuries, bringing hope to you and me.