How ‘bout them apples? A Parable about Lent, apple trees, and why giving up is a good thing

Leave a Comment on How ‘bout them apples? A Parable about Lent, apple trees, and why giving up is a good thing

Things are blooming here in Southern Ohio. The world is slowly pulling itself out of hibernation: the browns of our winter landscape are conceding to lush green carpets of grass. Overhead, barren trees are sprouting their first buds of growth; people seem to be wearing brighter smiles and a moving at a quicker pace. The taste of spring has me longing forthe daysI can be outside all evening after work.

I have an apple tree in my back yard that blooms beautifully in the final moments of each spring. I can’t wait to see it again; it is one of the coolest things in the world to watch. The first year we lived in our house, I was pretty proud of 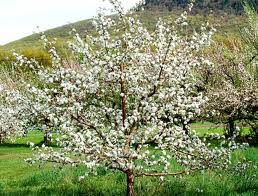 the hundred or so edible apples we were able to take from it. The following year, the tree sprouted so many new limbs it became a monstrosity; when it began to bear fruit, I don’t think any of the apples came out that well. The tree desperately needed to be pruned. This year, after my own failed attempt at the task, I decided to have an expert come over to the house and show me how to properly care for the fruit tree. This man was in his seventies and had managed his own orchard. He climbed up in the small tree and began to intentionally chop away. With each cut, it seemed, he would provide me another interesting story of his days running the orchard. He had won awards for his apples. While we worked in the spring weather, my children ran and played through the back yard. In my own attempt at pruning the tree days before, I had filled a meager garbage-bag full of fallen branches. When this man was done, we had packed the entire bed of his pick-up truck with unnecessary limbs. As we finished, he stood back and gazed at his work with a smile of satisfaction, it was remarkable how much he had cut away. He explained to me in great detail how we had liberated the tree or, in a sense, had enabled it to focus its energies to produce better fruit through its more vital and lasting branches.

I sat on the patio talking to the tree guy for a while. As I looked at the vast space we had cleared out, I thought of my own life. I often talk about Lent as a time to commit and be more intentional about the things that matter. But looking at the considerable area we had cut from the tree in order for it to produce better fruit made me contemplate that maybe Lent should also be a time of pruning. I find it so true that we are what we give ourselves to… that we become the very things we commit to becoming. As I thought about the “branches” of my day to day schedule and the things I wanted to be more intentional about, I was persuaded of my need to remove some limbs from my life.

Tree guy interrupted my train of thought, thanking me for the water, and asking me if I had a pen. He explained that if I was going to get really respectable fruit from the tree, we needed to create a list of things for me to do in the coming months to care for it. I returned with a pen and paper and began to write. When he finished his instructions (ten minutes later), I had a page-long inventory of sprays and treatments necessary to nurture the tree into producing an entire season of pristine, edible fruit. I was shocked at the intention involved in properly cultivating a fruit tree.

He finally left and I went on to have dinner with the family, help with homework and play with the kids. Later that evening, I sat down again and looked at his long list of requirements. I adore being outdoors, and I enjoy growing stuff. I also love the idea of the apple tree and want to be the guy that can bring people bags of “Kroger-worthy” apples from my backyard. How ‘Wendell Berry’ would that be? As I thought about Lent and being intentional, I realized there was a big problem with the apple tree. My life is cluttered with responsibilities as thick as the branches of the tree before we pruned it.Something tells me I need to be more intentional about so many other areas of my life:parenting, teaching, writing, prayer…. The last thing I really need is another time-consuming responsibility. In the grand scheme of my existence, I realized that having that “How ’bout them apples? – Thoreauvian moment” was not really that important. I looked at my list of requirements for a good fruit tree and tore it in half. I’ve resigned myself to having some spotty apples (and only a handful of edible ones) from this year’s crop.

Lent is as much about quitting the obligations that clutter our life as it is learning to dedicate ourselves to more eternal tasks — fewer branches equal better fruit.