Leave a Comment on Guy Rodgers & Wilt’s 100 Point Game: Who is Your “Assist-man”?

Last week there was a lot of talk about the greatest record in the history of American sports. A little over fifty years ago, a 7-foot-1, 275-pound center by the name of Wilt Chamberlain scored 100 points in leading the Philadelphia Warriors to a 169-147 victory over the New York Knicks. It was March 2, 1962, at the Hershey Sports Arena in Hershey, Pennsylvania. Many have called it the greatest individual achievement in American sports history. But…I have a bit of a problem with that… he goes by the name of Guy Rodgers. 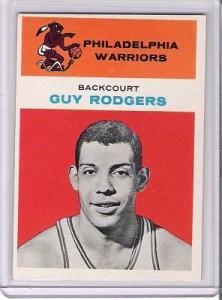 Rodgers was the point guard for the Warriors that historic night. His name is mostly a quick mention or a footnote in the recent onslaught of articles about that record-setting contest. As a junior in high school, I attended a basketball camp and had the opportunity to meet Guy Rodgers. I didn’t know who he was at the time, but I remember that my dad, who was rarely star struck, thought he was a pretty big deal.

Chamberlain’s dominance as a player is unquestioned. Hall of Fame basketball coach Bob Knight remarked that Chamberlain was possibly the greatest athlete in American sports history. But,I believe there issomething overlooked in all the talk of this amazing record. An argument I’m certainthat Chamberlain would quickly point out if he were still with us: no player, no matter how gifted, can accomplish such a feat on his or her own.

That night, Guy Rodgers had 11 points to go with an eye-popping twenty assists. He was directly involved with a third of the total points scored in the game. This four-time NBA All-Star from Temple University played a vital role in assisting one of America’s most celebrated sports records. Rodgers went on to play for San Francisco and averaged a double-double in assists and points the following season.

We so often attribute success to our hard work, our individual will, and our own talent. But do we talk enough about the folks who assist the achievement? As dominant a player as Wilt was that night, there is no way he could’vescoredso many basketswithout an outstanding point guard on the court with him. This is a truth weshould recognize in our own lives. Whatever your “100 point game” is: beating cancer, writing a book, climbing a mountain, running a marathon, finding your dream job, or getting that big promotion – it simply can’t be accomplished without an assist man. When we start peeling back the layers of even our smallest accomplishments, we’ll find we were compelled by plenty of assists: this bit of advice here, a helping hand there, and encouragement from the people around us.

Wilt’s story reminded me of Guy Rodgers and the many”assist men” in my own life. From the milestone accomplishments all the way down to the lesser professional ones, there are always folks thereto help me along. Ithought aboutthetimely assists I’d receivedduring trials of completing my latest book…from Chet, Zach, Kristy, Lil, Preston… the list goes on and on.

I suppose the greatest truth we could take from our “100 point game” is thatthere is no such thing as an “individual achievement” … a great reminder that we really do need each other on our journey.