What is Your “Jerry Maguire” Moment?

3 Comments on What is Your “Jerry Maguire” Moment?

I’m going to admit it. I am a sucker for Cameron Crowe films. I know what you’re thinking… Cameron Crowe movies are not real cool. I just love the way he tells a story. My favorite is the 90’s classic Jerry Maguire starring Tom Cruise, Renee Zellweger and Cuba Gooding, Jr….but, it’s not because of the lame “you complete me” Hollywood-romance part of the movie, I promise.

I love Jerry Maguire because of the vision… the one that keeps him up at night… the moment of clarity that sparks THE “memo.”

Many of us have had Jerry Maguire moments, where the difference between what we know is right and what we are actually doing becomes clear to us. This is how real life generally works and how God often “speaks.” These “visions” involve imagination and the sensation in our gut that knows right from wrong, perceives the divide between the way of the world and the way of God (and grace).

My nine-year-old son and I were standing in the checkout line at the grocery store during the holidays. He reached up and pulled off a food bank donation ticket and placed it on the counter with our groceries. I silently paid the bill and we carried our bags of groceries to the car. As we started home, he told me about the sign he read that explained purchasing the ticket would feed one family dinner for an entire week. Eli, who has never turned down a meal, said that he imagined how hungry he would be if he didn’t have dinner and just couldn’t bear the idea of a family somewhere not eating. My children are forever teaching me how the power of imagination can move us to action. 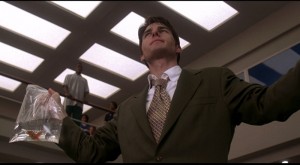 Jerry Maguire is faced with his moment of truth in the hospital with the hockey player. His imagination takes over, his heart is engaged, and he stays up all night writing a memo to his entire company. But, remember the results of his inspiration? Jerry is fired (because of the memo) and makes an impassioned plea to his entire office, foolishly scooping a gold-fish from the tank to go along (before Zellweger’s character, Dorothy, caves and joins him)… his self-doubt and regretare evident as he not-so-gracefully exits the firm. The imaginative beauty of doing the right thing quickly collides with the harsh reality of the real-world work ahead. He is literally out on the sidewalk. He has no safety net. His “memo” appears to have cost him his career.

That quintessential moment is the number one reason I love the movie. Jerry’s type of courage often looks really foolish. Doing the right thing is usually the road less travelled. In a society fueled by immediate gratification, being moved by the passion and imagination of truth is rarely popular or appealing, because the “payoff” is delayed. In the long run though, it leads to a life of deeper joy. It brings us one step closer to being restored.

I think we die a little and the world grows a bit darker each time we let these moments, realizations, these imaginative revelations slip by without acting on them. People who live lives of meaning and fulfillment are those willing to take action when they notice something about their world, their community, their neighborhood that misses the mark; those with the resolve to carry out their Jerry Maguire moment, to rewrite their “mission statement” and set out down the right path… even when the only one who will go with them is the goldfish.

3 thoughts on “What is Your “Jerry Maguire” Moment?”