A Deal with the Devil? (Just in time for Trick or Treat): An Interview with the Author of The Devil Wears Nada

Leave a Comment on A Deal with the Devil? (Just in time for Trick or Treat): An Interview with the Author of The Devil Wears Nada

Just in time for Halloween, I had the opportunity to talk with my old college friend, Dr. Tripp York, about his new book The Devil Wears Nada. Dr. York did something that few religious folks have the courage (or audacity) to attempt; he set out on a mission to find the devil. And he hunted Old Scratch in hopes that if he located him, he might pin him down on a mutually beneficial deal. That’s right, a real deal with Lucifer. 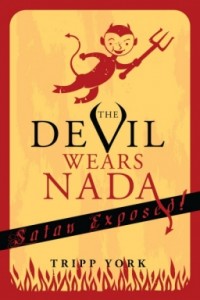 Dr. York would hand over his soul if Satan would agree to pay off his enormous graduate school loans… this is the stuff of Halloween blogs, is it not? Sounds like a script for the next Exorcist movie or a particularly scary episode of “Tales from the Crypt”. While you might be laughing, I can assure you that I will probably never share a cab with Dr. York or allow him anywhere close to my children again…

Dr. York’s light-hearted expedition was originally provoked by a wager made in one of his religion classes. He explores whether, in proving the existence of Satan, we might in turn prove the existence of God. Admitting the idea is not half-bad (and thus, conversely, only half-good), York enlists the aid of numerous ministers, theologians, spiritual warriors, pagans, shamanists, fortune tellers, and Satanists in his fiendish quest to determine the whereabouts of God’s first fallen creature.

York’s narrative style, humorous interviews and interesting theological positions make this book a great read. Whether you agree with his conclusions or not, The Devil Wears Nada is a compelling and funny account of the strange, bizarre, and (oftentimes) offensive things we think about God, the Devil, and everything in between.

Me: I don’t think anything you have ever written captures your sense of humor and your love for all different types of people like this book. You have some hilarious interactions in your quest for Satan. Which person was your favorite and why?

York: Ah, I get this question a lot—although in a variety of forms (who was the scariest? funniest? most intense?). It’s a tossup between Rev. Irving, the minister who proudly informed me that my acceptance of evolution proved I was demonic, and the shamanistic/pagan/mystic healer who was binding spirits in mannequins and offered to heal me of any afflictions I was currently undergoing—except the most important one, my student loans. Thanks, dude. I thought we were in this together.

I really liked both of them because they were so honest, so full of conviction, so peculiar, so eccentric, and so deeply invested in my very being. Yes, Brother Irving told me, as he poked me on my chest, that I didn’t need to look too far to find Satan (not too subtle that guy), but, at the same time, there was still a sense of concern that he had for me that really endeared me to him. And, you know, sometimes the best response you can offer to a person who chalks you up to being a child of Satan is to smile and say, ‘Well . . . maybe.’

Me: What do you want people to take from this read?

York: A desire to buy more of my books!

Outside of that, you know . . . I thought I knew the answer to this sort of question until I started getting feedback. I’ve been very fortunate to receive a lot of positive comments, which is really great, but the things that stick out to each individual reader that which makes an impression, has been remarkably different and totally unpredictable. Obviously, I think there is an overall point I’m making—or trying to make, but it’s exciting to know that various sections of the book have resonated with different readers in so many interesting ways. And, I think a lot of that has to do with those people who have had similar experiences as those described in the book.

Me: Did you ever worry for one minute that the Devil might take you up on the soul for student loans offer?

Of course, as you can see from how I re-narrate what constitutes the soul (the classical Christian account of embodiment constituted by God’s breath and the earth as opposed to housing some immortal immaterial Platonic nothingness that animates/occupies us and then withdraws its incorporeality once the heart stops beating)—okay, lengthy parenthetical remark aside, the answer to your question is, ‘If such a “non-thing” exists, then the devil can have it.’ But, you know, whatever the devil is, I’m thinking “he’s” much too crafty to fall for that one.

Me: It struck me that you might draw more ire for voicing your exploration of Satan than anything you could ever write about God. Have you experienced any hostility?

York: I would say you have been correctly ‘struck’ . . . or stricken. Yeah, the response has been very interesting. As I said, I’ve received a lot of great feedback, but I’ve also received my fair share of “You’re going to hell!” comments (tell me something I didn’t already know). One incredibly zealous minister, who clearly overestimates my influence, informed me that my writing could “damn the masses.” Masses? What masses? I have, like, 16 readers!

Me: Without spoiling the book for folks, what did you learn writing The Devil Wears Nada?

York: I learned that Flannery O’Connor was incredibly astute in her ability to create genuine characters, that people’s sense of humor is not as forgiving as it should be, and that no amount of Jack Daniels will ever alleviate my immense fear of puppets. It’s a terrible burden I bear.

Me: I love that your blog is titled “The Amish Jihadist”. I think your talent as a humorist is on display in your mission to find the Devil. Do you have plans to head out on any other hunts?

York: Witch-hunts of the non-inquisition sort. We Mennonites are lovers, not fighters.

Hey, thanks for the blog shout-out. By the way, it’s moved to The Other Journal. Here you go: http://theotherjournal.com/amishjihadi/

Otherwise, I’m currently trying to wrap up a three volume series of books on nonviolence toward enemies, animals, and our lovely planet—no satire there (though, such thinking is clearly absurd). It’s called The Peaceable Kingdom Series. The first volume, A Faith Not Worth Fighting For, should be out soon. The whole series contains contributions by people such as Stanley Hauerwas, Brian McLaren, Shane Claiborne, Carol Adams, Greg Boyd, Amy Laura Hall, Marc Bekoff, and on and on and on. It’s ridiculous. I don’t know how we managed pulling off this coup. Sold my soul to Satan, I guess—ahh, that wasn’t predictable at all. My apologies. I’ll stop now.