A Review of Brennan Manning’s Memoir: All Is Grace

Leave a Comment on A Review of Brennan Manning’s Memoir: All Is Grace

I first heard Brennan Manning speak twenty years ago at a college chapel. He bounced around the stage with a shock of white hair and the most God-awful Scotch-plaid sport coat ever blended in a mill, with polyester green pants to 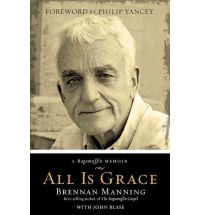 match. I remember his illustration of an old preacher who delivered a defining moment in his journey by telling him “Be who you IS, because if you ain’t who you IS, then you IS who you ain’t”… He looked like a guy who was ok being who he was.

I have never forgotten his call to honesty and transparency and the powerful moments in the sermon.

Manning’s preaching assaulted the foundations of my young religious worldview. I had grown up in a world of piousness and religiosity that left me working to dress, talk, and act in an effort to fit in and feel acceptable to God…I was earning my salvation. His message was the dynamite that cracked the religious veneer of works-based salvation I was using to barricade myself from God.

His message was and always has been clear and simple: “God loves you unconditionally, as you are and not as you should be, because nobody is as they should be.”

I opened the pages of Manning’s Memoir All is Grace: A Ragamuffin Memoir, when I received it last week, and read it in one evening. I could not put it down; I venture to guess you won’t be able to either.

Since hearing that first sermon, I have read a number of his books. Many that affected the same “damage” on my misguided approach to earning God’s love. His memoir does what they were not equipped to do: it sanctifies Manning’s message of God’s grace with more power and certainty than anything he has ever penned.

Some will review this book and point to his confessions of a life-long struggle with alcoholism and his failed marriage in effort to discount his ministry. Manning shares his struggles with a beautiful honesty that is uncomfortable to read at times. In a religious culture that demands we put our best foot forward, a popular culture where our self-righteous ego’s have grown digital skin and taken on a life of their own: he reminds us once again that grace can only come through the dirt and mire of transparency before God and our community. Through his own candid admissions, he points to the truth that if we are to grasp the depths of God’s grace and love, we must first “Be who we IS” before Him.

The memoir is an honest portrait and an enthralling story. Manning writes of the pain of the strained relationship with his mother, his time in the military and the Little Brothers of Jesus, the disapproval of his family and the Catholic Church, and his short-comings as a husband. But he also shares in a way that he has not before the personal moments of transformation before God.

There is a subtle grief as you read the familiar and beautifully crafted words and realize that he will never write again. As I closed the last pages of his final words, I mourned for those who have spent their lives scoffing at his ministry by calling it “cheap grace.” Cheap would be easy to understand, if there was anything “cheap” about the message of Grace that is the foundation of his final book, I question why we can never quite get our minds around it.

Manning closes his memoir explaining that he now lives out his days in hospice with a full-time caregiver. He shares a peace in those final words that somehow, through confession, he has fallen deeper into the arms of the One who truly loves him… as he is… not as he should be… because he was never who he should have been…

I can only believe that the Grace that Manning writes about, the Grace that is the theme of his final work is too vulgar, too ridiculous not to be true.

God bless you, Brennan Manning. The candid story of your life will prove more lasting and deeply affecting than all of your best-selling books and successful preaching. Your confessions have given us strength and provided undeniable witness to God’s unfailing love – your mission is accomplished.