The Monster in the Closet (Choosing to Trust)

I had a big closet at school. It was the kind of closet that drew co-workers to come and store stuff all times of the day. Traffic was so frequent to the closet that one might have suspected it was a coffee bar or held a keg in one of its ancient cabinets. The closet also contained materials so old it could have functioned as the high school’s time-capsule if the New-Madrid fault ever gave way and buried southwest Ohio. 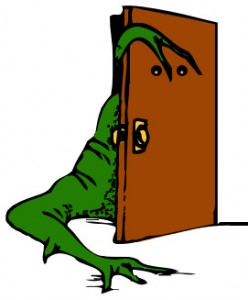 Its cave-like qualities coupled with the wild-life (Jurassic-sized crickets) that migrated up through the vents of the science lab downstairs made it less than desirable for anything but storage. The closet also had its own legends – I once heard rumors of teachers in the dark ages (early 90’s) putting students in the closet for bad behavior.

I didn’t think it unreasonable one day to pull a desk intosaid closet and close the door while my student teacher taught class. I assumed I could keep an eye on the proceedings while not actually being in the room. Good plan, right?

Nope. Throughout my fantastic apprentice’s lesson, the students kept glancing back toward the closet’s window. One boy eyed the closet with the suspicion of a five-year old who still believed that monsters occupied closets. Everyone in the room was aware of my presence. The young teacher had earned my trust, yet my observation from the closet sent a much different message. It was a rather unintentional mistake I quickly corrected.

If I wanted to “give the keys to the classroom” over to my apprentice, I needed to leave the room. My presence was curious to the students, and implied a lack of trust in the teacher who was instructing that day.

It occurred to me as I quietly exited to a neighboring classroom – that we handle our lives in the same way. Suspicion is thick in the atmosphere these days. Modern culture possesses an unhealthy obsession with distrust…It originates with public figures we do not know, but spreads like a contagion into the way we view our neighbors and the very people who have earned our trust.

We are wary of our pastors, leaders, bosses, politicians and neighbors — despite their records. This pervasiveskepticism is splintering our sense of community –at school, at church, and in the arena of public policy.

Keeping an apprehensive eye toward our neighbors isn’t a pleasant way to live. Distrust occupies our attention and consumes us until we truly begin to look like monsters in the closet.

Healthy relationships are sustained by trust.

Expect the best from others and I think you’ll discover most of the time they will live up toyour expectations.

With how many people are you willing to simply “hand over the keys” and walk out of the room? I hope your list is long. Its a better way to live.