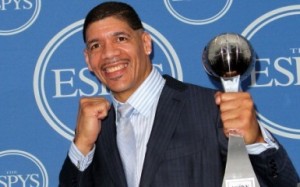 Did you catch the ESPY awards? I sat down for a few minutes with my DVR over the weekend to watch and was captured by the story of the man who received the Arthur Ashe Award.

Dewey Bozella was wrongfully convicted of a murder in 1983. Amazingly, he walked away from a chance at freedom via a plea deal ina 1990 retrial and even turned down being released for parole when both times he maintained his innocence and refused to admit to the crime he did not commit. The story showcased Bozella’s love for boxing and how it transformed his life. In prison, he earned a bachelor’s degree and a master’s in theology, developed interests in theater and became the light heavyweight boxing champion at Sing Sing.

But as I watched it, I was completely captured by this man’s deep sense of the power of forgiveness.

There were many profound moments in the ESPN presentation. Whenhe encounters the man who murdered his brother in the prisonchapel, Bozella recounts asking him why he did it and then finishes the story by simply saying, “I forgave him.”

He was finally released in 2009 when it was brought to light that the prosecution had destroyed evidence and another convict had actually admitted to the crime for which Bozella had served thirty years of prison time. His defense attorney remarks that, “He was not angry” and Bozella concurred saying, “what prosecution and police did… I’m gonna let it go… I haveto get on with my life.” As he said this, I wondered how difficult it would be to simply “let go” thirty years of wrongful imprisonment. To simply forgive the person who murdered your brother.

Dewey Bozella is certainly admirable for his courage, his hope, his convictions and his character. But as the story ended, I began to realize that Dewey Bozella has been a free man for a very long time. His understanding of forgiveness has enabled him to live a life of liberation and freedom much richer than many of us…even when he was still behind prison walls.