Leave a Comment on Faith and Politics: Entering Another Political Season 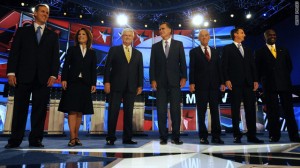 Surfing through TV channels last night, I came across a debate of potential GOP candidates on CNN. The national election is on the way…whether we are ready for it or not. Over the next year and a half, our 24-7 news coverage will make sure we can observe every candidate appearance – and not just speeches, but every hand-shaking, baby-kissing, on-the-street appearance.

The story of the Gospel is full of characters with errant misconceptions about the role of Jesus in Israel at the time. Herod felt his position was being threatened by news of the Messiah’s birth, so according to the Gospels, he murdered the first born sons of an entire region in an attempt to eradicate Jesus. The Jewish people must have been frustrated at the time to hear Jesus say to the Pharisees, “Render unto Caesar the things which are Caesar’s, and unto God the things that are God’s” (Matthew 22:21). The Jewish people understood that the Messiah would bring freedom from Roman occupation, justice to those who had been mistreated and peace to the nation of Israel. They believed He would affect political change in their world. Many of them were disappointed. From my perspective, Jesus didn’t seem to value political power as an agent of change.

I do believe we need to be careful in the coming year not to confuse our obligation as responsible citizens of this country to cast our ballots at the voting booth with intentionally practicing our faith. Voting in November is no substitute for working to make meaningful changes in the lives of people on our own street (and our neighbors across the world). While weshould value our precious opportunity to participate in the politics of a free society, we must not equate casting our vote with truly loving our neighbors.