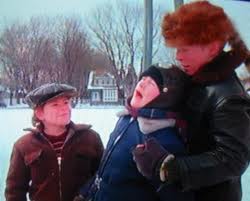 In the fourth grade, I attended elementary school in Olathe, Kansas. In the middle of a game of “freeze-tag”, four classmates surrounded me. The group parted and the leader of the pack (we’ll call him…Barry) walked casually toward me. I failed to anticipate the menacing nature of what was about to happen, something that can only be described as a random act of playground terrorism. Barry reared back and kicked me in the groin as hard has he possibly could. I remember getting sick it hurt so badly. I wasn’t picked on very often or bullied; in fact, I remember being one of multiple people targeted that fateful day at recess by Barry and his terror cell.

Almost twenty years later I was walking through the foyer of a church convention and ran into an acquaintance from college. My friend was talking to a man who looked suspiciously familiar. As I reached out to shake hands, my friend said, “Barry, you remember Matt? He lived right down the street from us in Olathe.”

Twenty years may seem like a long time… but in themoments it took me to identify him as “Barry, the lead perpetrator of the egregious act of recess violence”, there was an impulsive split-second that I imagined what the world would look like if I just smiled, shook hands with Barry…

just kicked him in the mid-section.

Fortunately, my adulthood and civility won out, I refrained from a long-delayed act of retribution. He had actually grown up to be a very nice person. I am not sure Barry even remembers what happened that day on the playground.

I was laughing with some friends about how Sit-com it was that the thought of kicking him back even crossed my mind for an instant! Can you imagine the insanity of that?

This entertaining story made me thinkof grudges and I began to consider my playground assault as a metaphor for the ways we are injured as adults. The sad thing is that many people spend their lives hoping for the chance to retaliate like that.

They have been “kicked in the groin” and are waiting for the opportunity to return the favor.

Life is full of “playground terrorism”. It can feel like a kick when we are slandered, gossiped about, stolen from, lied to, disrespected…

A grudge can turn that moment of pain into a life of hurt.

We can end up giving the person that injured us even more power over our lives.

Have you been kicked lately?

What can you do to let go of your grudge…?

“At that point Peter got up the nerve to ask, “Master, how many times must I forgive a brother or sister who hurts me? Seven?” Jesus replied, “Seven! Hardly. Try seventy times seven.” (Matthew 18:21-22)

“In a very real sense, without forgiveness, there is no future.” – Archbishop Desmond Tutu

One thought on “The Grudge”