An Interview with Pastor, Social Activist, and Author of Becoming King: Troy Jackson

Leave a Comment on An Interview with Pastor, Social Activist, and Author of Becoming King: Troy Jackson 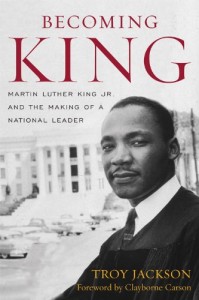 Troy Jackson, the pastor of University Christian Church (Cincinnati), completed his Masters of Divinity at Princeton Theological Seminary and received his PhD in American History from the University of Kentucky. He was the editor of The Papers of Martin Luther King Jr. Vol. 6: Advocate of the Social Gospel, September 1948–March 1963), has written numerous articlesabout faith and social change, and is author of the critically acclaimed book, Becoming King: Martin Luther King Jr. and the Making of a National Leader, which is described as a convincing reinterpretation of the role of King in the Montgomery, Alabama bus boycott of 1955–56. You can read more about Troy here: http://www.universitychristianchurch.net/about/

His work Becoming King has received a ton of critical reviews. Not only is it a wonderful read for those who want to know more about the life of the remarkable Dr. King, it is also serves to remind us that we are truly shaped by our community. According to the School Library Journal, Jackson’s book points to the inspiring reality that there were many extraordinary people who helped mold Dr. King’s powerful message and ministry: Jackson grants that King’s inspirational oratory and ability to communicate to African Americans across class lines made him a powerful symbol and chief spokesman of the movement there. However, the black community in Montgomery had laid the groundwork through its organizing activities in the late 1940s and early 1950s. Local activists, white and black, including NAACP leader E.D. Nixon and Women’s Political Council president Jo Ann Robinson, as well as civil rights lawyers Virginia and Clifford Durr and librarian Juliette Morgan, planted the seeds that flowered in the boycott. Jackson concludes that in many ways, King did not make the boycott movement; the blacks of Montgomery made him.

Critical reviews of Jackson’s book are rightfully glowing: Publisher’s Weekly commented, “This account of the Montgomery desegregation struggle benefits from a subtle shift in focus to the ordinary men and women who served as the foot soldiers in the 1955 bus boycott. Jackson’s storytelling skill and broad perspective make this a worthy addition to the literature of the U.S. civil rights movement.”

And the Indianapolis Star raved, “”Jackson does a wonderful job of demonstrating how King found the voice we know so well today and how the principles of non-violence that are so central to who King was were developed during his time in Montgomery.”

As a fan of biographies about Dr. King, I highly recommend that you pick up a copy of Troy’s work. I found hisbook to be essential in understanding the bitter reality of life for African-Americans in Montgomery, Alabama, and enjoyed learning about the powerful impact that women of faith played in the organization of the bus boycotts and the formation of the movement that would change America for the better. It is an indispensable read. (You can purchase a copy from Amazon by clicking on the book cover above).

I was running with a friend of mine one day whoworks on campusat the University of Cincinnati and telling him about a wonderful biography of Martin Luther King, Jr. I had just finished when he mentioned Troy, his book, and his wonderful ministry in Cincinnati.

As Pastor of University Church, Troy is well known around the city for his

persistent work for equity and justice in the inner city of my hometown. He can be found ministering to college students, organizing justice meetings, and endeavoring to restore equity to those who have spent their lives on the wrong end of the power structure in our city.

Troy’s voice is necessary in a community (like many in America) whose times of worship are still despairingly segregated among racial and socio-economic divisions. He is a leader making a difference by sharing the healing power of the Gospel in the lives of those in his own neighborhood.

It was an honor to talk to Troy a little bit about his work in Cincinnati, his book about Dr. King, and his vision for racial and economic equality.

Matt: What is something unexpected you came across about Dr. King or the movement in Montgomery while doing research for your book?

Troy: I was surprised and excited that we can match so many of King’s early sermon manuscripts to sermon titles we know he preached in Montgomery, particularly during the early months of the boycott. Analyzing these early sermons helps one gain a glimpse of the growth and development of King’s leadership and faith as a young leader.

Matt: What can communities of faith do today to continue to work for equality and justice in our society?

Troy: My friend Alexia Salvatierra likes to say that any major injustice facing our society is undergirded by a big lie that people often assume to be true. During King’s day the lie was that some people are worth more than others. To work for justice in our communities, it is important to ask what lies are being told that lead to injustice. It is also important for faith communities to ask what is already happening in their community in the struggle for justice rather than trying to start from scratch. Connecting with what is already happening honors those already in the struggle and helps combat arrogance and paternalism.

Matt: Who are some of your favorite writers/books?

Troy: I am a big fan of Dietrich Bonhoeffer, and particularly his books “Creation and Fall” and “Christ the Center.” I also enjoy Brian McLaren and thought Rob Bell’s Love Wins provoked a lot of great questions. I also just read a very readable and compelling book on Union History called There’s Power in a Union.

Matt: Where you in Cincinnati for the race-related issues that took place in the 90’s? How did that shape your outlook or ministry?

Troy: I arrived in Cincinnati in 1994, and experienced the uprisings of April 2001. The riots demonstrated the deep racial tensions that continued to exist in our city. These divisions are also still affecting the Christian community and the church. My passion for racial justice and biblical justice were further refined during the riots and aftermath of 2001. Thankfully, we are making real progress in connecting congregations and pastors across racial lines in our city. Unfortunately, we continue to have racial tensions and challenges as well as systemic injustices that have not been addressed.

Matt: As a university pastor — what do you believe is the greatest challenge to the Christian faith in the 21st century?

Troy: There is a risk that we become an increasingly post-Christian society over the next fifty years. While the power of conservative evangelical and fundamentalist faith will prevent a total collapse of Christianity in the United States, it may become a Church that defines itself totally by what it is against in culture and society rather than being for Jesus, for grace, and for love. I pray that through attention to racial justice and biblical justice in addition to prayer, evangelism, and discipleship, the church can stem the tide and become more vibrant than ever.