It’s the end of the world as we know it… (Maybe in October?)

Leave a Comment on It’s the end of the world as we know it… (Maybe in October?) 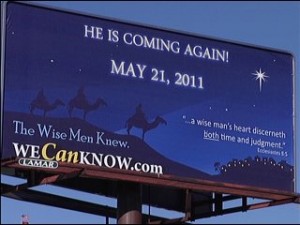 Billboards were purchased across the country in the last few months proclaiming the end of the world on May 21st at six o’clock. I was texting with a friend this past Saturday and he conceded some confusion as to the intended time zone… we laughed about it a bit. I spent the evening grilling out, watchingthe children play, and listening to tunes on the back porch (yes, R.E.M. might have been on the playlist), on what turned out to be a beautiful andrelaxing Saturday evening…a little less eventfulthan the forecasted doomsday.

There were hundreds of stories and comments (many penned before Saturday) about the aftermath of Mr. Camping’s inaccurate prediction. One of my favorite remarks was: “At least they are now legitimately a Non-Prophet Organization.”

The completely reasonable explanation for this apocalyptic mix-up has been revealed. As it turns out, Camping’s math was off. He is revising his prediction — you can read about it here:

The sad reality is that many people are experiencing “end of the world” type conditions in the aftermath of devastating tornadoes across our country. First in Tuscaloosa, Alabama and most recently this weekend in Joplin, Missouri, where the latest reports have the death toll at 116 and climbing with unbelievable destruction: http://www.cnn.com/2011/US/05/23/missouri.tornado/index.html?hpt=T1 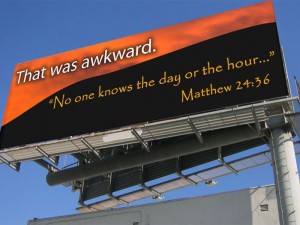 so far short of the Gospel’s call to be Jesus to those in need. According to the CNN piece, Camping’s organization reportedly received 80 million dollars in donations between 2005-’09.

Sunday at church, we watched a video about a group of men that loaded up a truck with supplies and money and drove to the ravaged town of Phil Campbell, Alabama. The guys spent a week rebuilding the house of a family that had lost everything, and simply loving the people on a street where the tornado had taken the life of the grandson of this family’s neighbor.

It occurred to me that we should be careful about where we say Jesus might show up. The reality is that Jesus most often shows up when we do.

He certainly did this past week on that demolished street in Alabama and transformed the lives a family that had never even heard of our church here in Cincinnati, Ohio. Talk about following in the footsteps of the God who “moved into the neighborhood.”

Maybe rather than spending money on billboards warning people of God’s return, we should busy ourselves demonstrating what it looks like when the people of God show up in the midst of hurt as we help return order and peace to chaos and ruin.

One of the residents of that Alabama street commented, “…They brought smiles to two little girls’ faces and helped rebuild their home. They also provided something invaluable… hope and faith in times of distress.”

Jesus shows up when His people roll up their sleeves and willingly take the steps to be present and available to do His work.

He showed up in Alabama last week with a truck, money, anda fewwilling hands to bring some hope and light to a tragedy.