An interview with author, filmmaker, actor, and pastor of Vineyard Community Church in Cincinnati: Joe Boyd

Leave a Comment on An interview with author, filmmaker, actor, and pastor of Vineyard Community Church in Cincinnati: Joe Boyd

Joe Boyd is currently a teaching pastor at Vineyard Community Church in Cincinnati, Ohio. In 2002, he left vocational ministry to spend some time working in Hollywood as a professional actor and screenwriter. The talented Boyd is a now full-time pastor, author, story-teller, 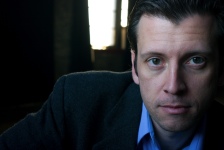 actor and filmmaker. His latest movie project won Best Feature Film in the 2011 Derby City Film Festival and the Audience Choice for Best Feature Film at the 2010 Cincinnati International Film Festival. The film was produced by Rebel Pilgrim Productions, an independent film production company with offices in Las Vegas, NV and Cincinnati, OH. It was described in glowing terms by Kristopher Rommel, Derby City Film Festival director as, “Perhaps the funniest movie in the history of our film festival.”

Hitting the Nuts is the ‘”true story” of the annual illegal poker championship in Scott County, Indiana. When a poker player “hits the nuts” it means he can’t lose – that he’s a sure winner. This movie only

pretends to be about poker. It is really about an outrageous group of blue-blooded American misfits who have spent a lot less time hitting the nuts in life and a lot more time having life return the favor. (You can learn more about Boyd’s film by clicking on the cover art).

Joe Boyd has also recently authored a wonderful work of fiction titled Between Two Kingdoms with Standard Publishing. In this work of allegorical fantasy,he takeshis readers on a pilgrimage to a land of two kingdoms, but only one true King. The story is set in an ancient land where children never grow old. It is a living land, where foundations grow in trees and rivers sing and breathe. It is also a dying land, where the darkness of a false prince threatens to swallow everything in its shadow. Boyd’s tale invites you into an adventure with Tommy, a child of the Great King, as he and his friends accept the challenge to live as grown men and women in the Lower Kingdom—where hope is hidden, vision is clouded, and pride twists truth into a beautiful yet deadly deception.

According to one glowing review, “…readers are easily drawn into this sharply-imagined novel. A clever plot device poses the inhabitants of the real Prince’s Upper Kingdom as eternally seven-years old, making their risky life-and-death mission into the Lower Kingdom a powerful allegory. Lovers of fantasies from C. S. Lewis to J. K. Rowling rejoice: a new author has delivered the goods! And 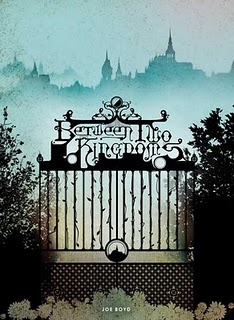 with a parable that will rattle your view of “real” life.” (You can purchase Between Two Kingdoms from Amazon by clicking on the book cover).

Boyd was kind enough to sit down and answer a few questions about art, faith, movies, and writing. It is a pleasure to have the opportunity to interview someone with such diverse talents and a heart for sharing the grace of the Gospel.

You can read more of his writing by visiting his blog: http://rebelpilgrim.blogspot.com/

I hope you enjoy this “Friday’s Five Good Answers” with Joe Boyd:

Matt: I have written about the principles of fairness and idealism and the curiosity that I believe Jesus is speaking to in his reference to being like a child in Matthew 18. This is an idea that seems to play a big role in your novel Between Two Kingdoms. Can you elaborate a bit on that?

Joe: The whole story that became Between Two Kingdomsstems from Jesus’ statement to receive the Kingdom like a child. You could say it is a midrashic exegesis of Matthew 18:1-5. Admittedly, the very fact that I use the phrase “midrashic exegesis” in a sentence about a fairy tale is a pretty good sign that I need to see the Kingdom more through he eyes of a child. My faith had become very heady — almost academic. My studies brought me to see that the message of Jesus was fundamentally about the idea of the coming and present reign (Kingdom) of God. That understanding saved me for Christianity. I had been given Christianity without the Kingdom, which is a shadow version of the truth. This story is a reflection on that.

Matt: What is the story behind this particular work of fiction?

Joe: The story started over a decade before it was published as a personal project to attempt to get the truth of the Kingdom of God from my head into my heart. I had grown up loving the stories of JRR Tolkien, CS Lewis and George Lucas. This obviously emerged from those influences. I remember reading Orthodoxy by GK Chesterton just before writing B2K. He says there that fairy tales are the ultimate form of truth. That made me what to write one.

Matt: How is writing a story different from filming a story?

Joe: I don’t fancy myself a true novelist per se. professionally speaking; I am a preacher, filmmaker and actor. Those are the jobs I have had. The thing that ties all of those endeavors to one another is the centrality of storytelling. I think in pictures. When I tell stories I just describe the pictures I see in my mind. I drift toward oral storytelling and film production as my primary ways to tell a story. Writing this book was a new challenge for me. I enjoyed it, but found the writing process taxing…especially the edit.

Matt: How has your background as an actor/filmmaker impacted your writing?

Joe: I think being an actor and filmmaker helped me create dialogue and action. What was new to me was inner dialogue. In a movie you don’t have the ability to say what a character is thinking or feeling. That is all done as the actor and director collaborate to interpret a script. In a novel, the story is allowed to live in the characters’ minds as well as their words and actions. That was a new world for me to explore.

Matt: What are some of your favorite films? Actors?

Joe: I am a comedic improviser more that anything else. I was an improviser who became a screen actor. My favorite movies are Christopher Guest’s slate: Waiting for Guffman, Best in Show, etc. I love strong, committed comedic actors like the team he pulls together in those movies. I love Will Ferrell. I think he is fearless. Kristen Wiig is fearless as well. Dramatically, I love Philip Seymour Hoffman and Paul Giamatti. I just saw Giamatti’s new movie, Win Win. It was amazing.

Matt: What led you from your work in Hollywood to Cincinnati, Ohio and the Vineyard?

Joe: God. It was the only time in my life when I can safely say that I had a supernatural calling. I’ll save you the long story, but it was a series of miracles that got me here. I had no intention to ever do fulltime vocational ministry again. He brought me back for his own purposes that I am still deciphering as I walk through it.

Matt: How has working in the creative arts — writing, acting, filming — impacted the way you see/practice/ live out your faith?

Joe: Very dramatically, especially my training as an improviser. Life is improvised. Leadership is improvised. I prepare for all of my sermons, but they are all also improvised in the moment. It just defines me to my core. There are “rules” that make improv work. Those rules are in play in every area of my life all the time. It’s who I am.

Matt: What do you believe is the biggest challenge to the Christian faith in the 21st century?

Joe: In the Western World, we are a behind the eight ball. There is no return to the power the church once held in this culture. My grandkids will be brought up in a completely post-Christian world. We have to be able to separate the gospel of the Kingdom from the Christianized cultural religious identity of the past. Many people are teaming up to try to save our Christian cultural identity. I fear they are accidentally protecting something other than the gospel. I think the church at its best will find itself incarnated and at the edge of the culture. We will need to lose power to find it.

Matt: What do you see happening in churches that really gets you excited?

Joe: I get excited about churches that are embracing and pushing into Kingdom theology and putting it into practice. I think churches that can find the balance of personal conversion, community formation; social justice and cultural reform are onto something. I am also excited by the house church movement. I used to be an active part of it and really pray that something will break out in the USA in a big way there.

Matt: Tell us a little about your next project?

Joe: I am sketching out some ideas of a non-fiction book around the narrative nature of Christianity. Right now I am producing three movies, so most of my creative energy is going there. My last movie, “Hitting the Nuts”, a poker-themed comedy was just realized on DVD this week. (www.hittingthenuts.com). We are preparing to shoot a romantic comedy in September.

Next week’s edition of “Friday’s Five Good Answers” will feature another fellow Cincinnati author. He is an activist determined to end generational poverty in the city of Cincinnati and the lead pastor of Crossroads Church – Brian Tome.