Every once in a while, as I sift through the propaganda, politics, and general hopelessness that seems to dominate the headlines of the news, I come across a beautiful story. As a former publicist, I understand why bad reports govern the banners of our national news. Trepidation and worry capture an audience. I came across this article on CNN’s Belief Blog the other day and wanted to share it with you.

It is a story that involves the central villain of the civil rights era, former 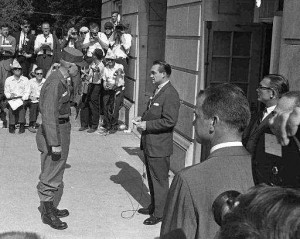 Alabama governor George Wallace, and his quest to be pardoned by those he had wielded his politicalclout to callously subjugate.

It is a story about reconciliation.

“Tuscaloosa, Alabama (CNN) – I had always heard the stories of Alabama Gov. George Wallace asking for forgiveness from the African-American community for his racist ways.

Yet I had never quite believed it, even if I had read accounts about it. The images of him standing at the door at the University of Alabama to prevent two black students from entering had been seared into my mind.

And so it was a pleasant surprise to stumble upon the Rev. Kelvin Croom amid the destruction left by Tuscaloosa’s recent tornado. The Croom family has been a pillar of the African-American community here for the last five decades.

Croom’s father, the late Rev. Sylvester Croom Sr., founded College Hill Baptist Church and served as chaplain for the University of Alabama’s football teams under the legendary Paul “Bear” Bryant and two other coaches. The elder Croom has been recognized as one of the state’s 40 pioneers of civil rights.”

You can read the full story here: http://religion.blogs.cnn.com/2011/05/11/black-preacher-why-i-forgave-george-wallace/?hpt=C2

I love the closing lines of this piece:

“‘Even in the days we were living with segregation, we all had a hope for a better day,” Croom says. “And right now, that’s what we’re doing in Tuscaloosa: We’re hoping for a better day, hoping we come from the ashes of destruction and into a beautiful, more livable American city.’

He adds, ‘If a lot of us would forgive people, we could find healing. We could find peace.'”

One thought on “A Powerful Story about Gov. George Wallace, Tornados, & Finding Peace in Forgiveness”