Friday’s Five Good Answers with Dr. Dan Boone – University President and author of A Charitable Discourse:Talking about the Things That Divide Us

1 Comment on Friday’s Five Good Answers with Dr. Dan Boone – University President and author of A Charitable Discourse:Talking about the Things That Divide Us

Dr. Dan Boone is a writer, speaker, professor and former pastor who is currently the President of Trevecca Nazarene University in Nashville, Tennessee. Dr. Boone is an engaging teacher who has instructed at several universities and seminaries including the Salvation Army. He received his doctorate of ministry from McCormick Theological Seminary. He has pastored churches in Illinois, Mississippi, North Carolina, and Tennessee. I have watched proudly as, under his leadership, my alma mater has gone above and beyond the primary call of an institution of higher learning to engage and embrace its neighbors with grace, passion, and excellence.He has helped enhance an agenda for compassionate work on campus and encouraged college students to boldly engage the world in a meaningful way with their faith and talents.

I first had the opportunity to hear Dr. Boone speak a long time ago as a college student during a short stint at a Nazarene university in Illinois. I vividly remember the wonderful letters he would write and read to his congregation at the opening of each week’s service. I recall that just enough of his slight Mississippi accent would emerge during those readings to warm his Midwestern congregation (and more transient collegiate church-goers) as they filed in from subzero temperatures and lake effect snow. I clearly remember how those letters made everyone in the room feel like family. Writing has always been at the heart of Boone’s dynamic ministry.

When I first heard the title of Dr. Boone’s new book, I thought of one of my literary heroes, Atticus Finch, who faces the ire and hostility of his hometown, his church, and his family for standing up and defending Tom Robinson. I was reminded that Atticus explains to his daughter that no matter how bad things get through the trial, she should always remember that the people of Maycomb are still their neighbors. Atticus treated those with whom he vehemently disagreed with the utmost respect. He treated them as neighbors. Unfortunately, we in the church have not always followed that ethic in our disagreements. Having written about the dangers of religious correctness, communication as propaganda, been disappointed by the tone of disagreements and our propensity to avoid tough questions – I was thoroughly excited to open Dr. Boone’s new book.

In his timely fifth work, A Charitable Discourse: Talking about the Things That Divide Us, Dr. Boone focuses on issues of controversy within the evangelical church. He attempts to address what he sees as, “the mean-spiritedness that is in the cultural Christian water these days.” He approaches these contemporary challenges with understanding, 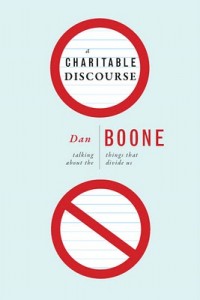 sincerity, and compassion while attempting to pave Christ-like ground rules of discourse for others to follow. In a style of writing that is familiar, comfortable, and decidedly poignant, he faces the questions: Why is it so hard to argue about these topics and others like them in the church? What keeps us from having open and honest conversations about complex and controversial issues?

Dr. Boone points out that silence in the pews about divisive matters can be deafening. Often, members say little, fearing disagreement and rebuttal; others strongly assert half-truths and biases. Nothing gets truly discussed…and many (especially the youth) become discouraged and leave.

A Charitable Discourse insightfully explores why this happens, looking closely at the ways people avoid and prevent authentic dialogue, from labeling and grandstanding to religious abuse. One reviewer articulated fittingly, “Dr. Boone has written a courageous volume that the evangelical church needs to hear with open minds and hearts.” It is one of the most well-timed and applicable books that I have read in the last several years. Whether you are a pastor, layperson, or simply someone who wants to explore a more compassionate way of working through disagreements, I highly recommend you read A Charitable Discourse.

(Click on the book cover to purchase A Charitable Discourse)

I recently had the occasion to talk with Dr. Boone about his work, his latest book, his efforts as a pastor and now as a university president.

I think you will enjoy this week’s edition of “Friday’s Five Good Answers” with Dr. Dan Boone:

Matt: Do you believe there are questions that shouldn’t be asked in church?

Dan: Outloud, yes. Like “Who thinks the preacher has preached long enough?” or “Anybody here want to take a vote on evolution?”

But there are few questions that should be banned from conversation between trusted Christian friends. The church is the kind of place we find those who can hear our doubts and queries without voting us off the island. Sadly though, political correctness has become Christian correctness and many are afraid to ask their questions because of potential judgment. Sad, but true.

Matt: Is there a specific situation that led you to write A Charitable Discourse?

Dan: I tired of the drive-by-bloggings that were happening to our university and other friends simply because of an expressed opinion on a controversial topic. The mean-spiritedness that is in the cultural Christian water these days needed to be addressed. The cause of Christ is being damaged by the way many who call themselves Christ’s followers are discoursing. We are called to love one another and to love our enemies. Love was notably absent in what I was seeing.

Matt: From my perspective, many of the outspoken opponents of “post-modern Christian thought” don’t understand that aspects of Biblical Interpretation dubbed “post-modern” are simply Jewish (and much closer to the way Jesus and the early church handled and interpreted religious text). Why do you believe this has this become such an issue in the church?

Dan: When one assumes authority over interpretation of Holy texts and refuses to submit to any authority, it becomes difficult to have a conversation. You are right. The post-modern world is much more Jewish in patterns of thinking than the modern world with its certainties. I happen to believe that the arrogance of the modern scientific age has finally dumped its load of arrogant certainty on us, a far cry from the more humble way of examining the world in Old Testament thinking.

Matt: Do you believe there is a disconnect between the actual theology of our denomination (what we teach in the academy) and the practice/beliefs of the Nazarene laity? Are we really practicing Wesleyans?

Dan: A huge disconnect; the Reformed/Calvinist movement has instilled in many Nazarenes a way of viewing scripture that is far from the Wesleyan way. They begin with the Sovereignty of God and move toward authority. We begin in the Holiness of God and move toward covenant love. One dominantly features right proposition, the other right relationship. Both are necessary, but they start at different places and end up with different approaches. Nazarenes have been arguing like Calvinists.

Matt: What do you see happening in church right now as we enter the 21st century that really gets you excited?

Dan: The generation now in college is asking the hard questions without fear. They are not arrogant and they are seeking faithful mentors. They intend to think Biblically, but not from the narrow interpretation that presumes upon scripture pre-determined answers of modern solutions. They wish to be God’s people, living in relationship with the God who is still creating, and serving as Jesus served.

Matt: Looking back over your life – what particular moment or experience was/ or has proven to be the biggest turning point (or a defining event) in your faith journey?

Dan: Easy, the professors I had in college who taught me to reverence the Bible and place myself under its narrative, then to imagine God’s ways in the current world.

Matt: People know you as a writer, a teacher, a pastor, and the President of Trevecca Nazarene University – can you share with the readers a hobby or something you enjoy that you think most people don’t know?`

Dan: A ‘67 Mustang that still knows how to take a curve. A nylon stringed guitar that doesn’t know I can’t play or sing. A good book on my back porch.

Matt: What inspires you to write?

Dan: I think it is the habit of preparing and writing sermons most of my life. When you get something that deep in your bones, you just itch to do it. I’m working on a book titled The Dark Side of God right now.

Matt: You write about some of the tough topics we face in our churches today — which of these topics do you envision becoming the biggest issue (not just in our denomination) but across the Christian faith in the coming years?

Dan: We’re not done with homosexuality in the church. This issue will split more denominations. But I think we will find ourselves in an important conversation soon about the impact of technology. When we learn to walk through the world listening only to our tech-pumped music, we don’t see the world anymore…and we become disconnected people.

Matt: Has your day-to-day work as university president impacted your faith? How?

Dan: I pray more for large gifts than I’ve ever needed to before… {joking} Actually, it has given me a fresh heart for the college generation. I want to do this job for the sake of my grandchildren (4 currently). When they are 16-17, I want them to have a place to attend college where loving Christians will lead them to think hard about life’s most complex issues, in an atmosphere of trust.

One thought on “Friday’s Five Good Answers with Dr. Dan Boone – University President and author of A Charitable Discourse:Talking about the Things That Divide Us”