I love the sequence in Harper Lee’s novel when the children catch the glint of something in an oak tree on their travels from school. The tree is part of the scenery of routine life for Jem and Scout; they pass it each and every day.

I was speaking in the south several months ago and had a woman from Monroeville, Alabama (Harper Lee’s hometown) approach me. She claimed that the landscape of To Kill a Mockingbird was more autobiographical than I could imagine. In fact, she asserted that there was even an oak tree that Harper Lee would’ve passed from her childhood home on the walk to the elementary school each day. I can’t verify that story; but, to me, it makes the sequence in the novel even more beautiful.

Boo Radley places gifts for the children in the knothole of the tree: sticks of gum, then pennies, and finally soap dolls. The message for me in this scene has always been wrapped around the wonder and curiosity with which Scout Finch pursues life and views the world, along withthe idea that the gifts are right there for her to notice in the routine of daily life.

The story of the oak tree makes me think of my friend Jason. Jason is an organic farmer and college professor. We have been friends for a very long time. In college, Jason who would go to the highest point in town and camp out next to his car for hours to watch a meteor shower. When I was young, I would poke fun at him for doing this. I believed there were better uses of time.

In the past couple of years, I have taken up star-watching. My wife and I 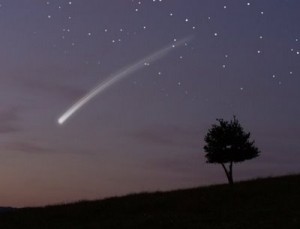 were visiting Jason’s family recently and he and I took a quiet evening stroll down 1st Avenue in our college town to look at a community project he was working on. I explained to him that I had started watching the stars; my wife had even bought me a book about astronomy. I told him I was sorry for poking fun at him about that in college. He just smiled. The older I get, the more I seem to agree with Jason about things. I was also eager to tell him something insightful I had observed. Sitting out on my driveway on clear evenings and looking up, I was amazed to witness the frequency of shooting stars. Before I began to watch the night skies, I believed that shooting stars were rare events. As I told Jason my new enlightenment, he commented expertly, “You can see two or three an hour on any given night if you just take the time to pay attention.” I found his declaration quite weighty.

I believe Scout’s curiosity and wonder about her world (the kind that grows native in the hearts of children) allows her to notice the gifts in a place that is a relatively permanent and mundane fixtureof her everyday life. I think too many people, as they get older and more mature, lose that sense of wonder and curiosity about the world around them. We move through the everydayness ofour existanceunaware of our surroundings.

Harper Lee’s oak tree has come to represent themagnificent moments that are transpiring right before me in the hectic pace of modern life…the things I take for granted or are too consumed to notice. It is likefinding something lost, a rediscovery of qualities I naturally possessed as a child. The lessonwas unknowingly articulated by my friend Jason in our conversation about the stars. There are a lot of beautiful things going on around you at any given moment “if you’ll just take the time to pay attention.”