There was Livestock in the Church Sanctuary (A Holy Week Meditation)

We visited the church I grew up in this past weekend for their Palm Sunday celebration. Pastor Rick, the current pastor, is one of our favorite people in the world. I have a lot of history at the church. It reminds me of people I have lost. I sit in the pew and can almost hear my dad and my grandmother singing “Come Thou Fount” just beside me. Every time I make that drive I recall when I would come back to visit from college and ride with my little sister, weaving dangerously in and out of traffic the whole way (we were eternally running late).

Most of the time it is Pastor’s thoughtful messages that leave me feeling challenged, but on this day, even with Rick’s wonderful sermon, the spiritual reminders for me came in the form of an unexpected guest…

I sat down in the pew with my kids (after greeting some folks in the foyer that I haven’t seen in way too long) just as the service was starting. Suddenly, a large group of actors dressed for the time period came through the sanctuary doors yelling and waving their palm branches as they marched 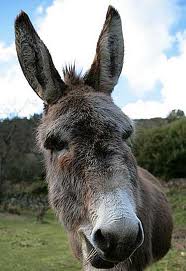 down the aisle. My kids were captured by the scene, and so was I…especially when a real, live donkey was led directly down the middle of the sanctuary with a Jesus look-alike on top! My youngest son immediately ascertained the possibilities in what was transpiring; he leaned over to me and whispered, “Dad, what are they going to do if he has to go to the bathroom?” Great question! Fortunately for everyone involved, it was one that went unanswered. I enjoyed laughing about the fact that there was a pack animal walking down the aisle at my home church!

The reenactment was actually very powerful. The actors welcoming Jesus were cheering, and yelling, “Hosanna! Hosanna!”…or, as Pastor Rick pointed out later on his teaching, “Save us! Save us!” The presence of the donkey in this scene of the bible sets the dramatic irony of what is about to happen to Jesus. Historically, there is symbolism in Hebrew kings riding in to town on the back of a donkey (Solomon, for example). It was seen by many as a fulfillment of Zechariah’s Messianic prophesies. Many write that Jesus’ choice of the donkey (instead of a horse) indicated his peaceful intentions. Most scholars agree that at least in this moment in the Gospel story, as word had spread of Jesus’ miracles (including the resurrection of Lazarus), the people believed his triumphant entrance indicated his intention to remove their Roman oppressors. The Jewish people were hoping for liberation. Jesus delivered them, but in a much different way than they hoped for…

On this day, as this large animal invaded the sanctuary, I was reminded of the donkey in the story of Abraham and Isaac. The Old Testament narrative mentions that Abraham retrieves a donkey in immediate response to God’s call for him to climb the mountain and offer up the life of his only son. God’s son travelled the same way to give his own offering – on a donkey.

The donkey is a representation of obedience.

The donkey is a reminder of the cost of our faith.

As we enter Holy Week, this visitation made me reflect on my own response to God’s call.

There is nothing like livestock in the sanctuary to remindme that obedience to God must cost me something… nothing like receiving an unexpected message from a donkey.