Jana Riess is the author of Flunking Sainthood, an upcoming (2011) book about failing at twelve different spiritual practices. According to her official biography, “she is also currently working on The Twible, a three-year 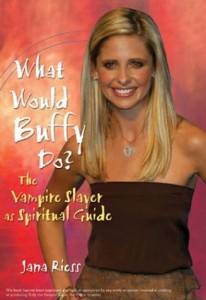 Twitter project with humorous daily Bible updates for your amusement (find her on Twitter: http://twitter.com/JanaRiess ). She has a few silly degrees from swanky schools, but was never once able to climb the rope in gym class. Her spiritual director is Buffy the Vampire Slayer.” Jana has authored numerous books including the 2004 release What Would Buffy Do? – where she dissects the cult-favorite television show’s moral message according to three themes: personal spirituality, companions (friends and family) and saving the world. Her writing often blends her wonderful sense of humor with delicately understated social and religious commentary that is both poignant and fun to read. She does not, however, shy away from controversy and takes a strong stand on issues that are close to her heart. Her work on Beliefnet is one of my weekly stops, and I highly recommend you place her on your blog-roll (http://blog.beliefnet.com/flunkingsainthood/ ).

Jana is a fellow Cincinnati writer. With advanced degrees in theology from schools like Columbia and Princeton (although she would never tell you about them), and a long history of working in and aroundreligious publishing, Jana possesses a profound understanding of faith culture in America. To call Jana “busy” is an understatement, she is currently

wrapping up work on her upcoming book, blogging, tweeting the Bible (with “Twible” — she plans to hit all 1,189 chapters in 140 characters!), all while teaching some university courses on faith and pop culture. I first came across her blog when she was kind enough to run an excerptof “The Parable of Scout Finch”from The Mockingbird Parables that focused on the role of women in faith, and have been a loyal reader ever since. I have found Jana to be as engaging as she is kind and thoughtful. I recently had a chance to sit down with her and talk about faith, writing and “Flunking Sainthood.” Here are “Five Good Answers” with author, editor, blogger and professor, Jana Riess:

Matt: Explain (for those who might not know) how you settled on the title of your wonderful blog “Flunking Sainthood.”

Jana: I wish I could take credit for it, but it’s related to a book coming out this fall called Flunking Sainthood. My editor, Lil Copan, threw out that title after I confessed that the book I wound up writing for her turned out very differently from the one she had originally contracted. I was supposed to write a humorous memoir about a year spent reading twelve spiritual classics. Being an overachiever, I immediately suggested that I should do a corresponding spiritual practice for each classic—so that when I was reading the Desert Fathers I would be fasting, for example, or when I read Abraham Joshua Heschel I’d be attempting an Orthodox Jewish Sabbath.

What happened is that I failed, in one way or another, at every damn spiritual practice. Sometimes I was technically able to complete the practice but realized that I had mixed or unspiritual motivations; sometimes I cheated a little, as with my month of Christian vegetarianism (hello, Amish chicken!), and sometimes I failed so miserably I just gave up (Centering Prayer). What came home to me through all of it is that there is value in failure itself, so I followed Lil’s advice to embrace the failure and make the book about falling short spiritually. The blog flows out of that as an outlet for people who are trying to live an authentic faith even if it doesn’t measure up to some yardstick they have for themselves.

Matt: You interview a wide variety of authors on your blog — is there someone that you would like to talk with and haven’t had the chance yet?

Jana:Are you kidding? Yes! Anne Rice, Cormac McCarthy, Francine Prose, Sarah Vowell, David McCullough, Ian Frazier….I am reading his new book on Siberia right now. It seemed appropriate for winter. And there are hundreds of other writers I would love to talk to, including J.K. Rowling. She’ll invite me to her castle in Scotland and we’ll chat over afternoon tea. Hey, a girl can dream, can’t she?

Matt: As a religion editor for years and a prominent blogger you have a unique view of the American faith landscape. What is the biggest challenge facing faith in America in the 21st century?

Jana: Disaffiliation and fragmentation. I’m going to sound like a naysayer to bring it up, but the “spiritual but not religious” trend should be of concern across the board, whether one is Hindu or Catholic or evangelical. Putnam and Campbell’s new study American Grace shows that the “nones” are the fastest-growing segment of the population, at 17% overall and more like a quarter to a third of the rising generation.

The problem with this is that the best religion happens in community, and America will continue its cultural balkanization even more quickly if people have a mass exodus from the laboratory of diversity that is community. At its best, organized religion challenges us to sit at table with people we don’t always agree with or even like. And that’s hugely important for society.

Matt: What is the most significant lesson about the practice of writing you have learned in your career?

Jana: Park your butt in a chair and just do it! Write every day, whether you feel like it or not; write to a deadline, whether self-imposed or external; write for an audience; write for yourself. It surprises me how many people feel they have a book in them, and even dream of writing a bestseller, but don’t take the time to practice writing. They wouldn’t expect to make the NBA if they never showed up on the court. Why should writing be any different?

So I like the fact that you call it the “practice” of writing. Some of what I write is garbage and occasionally it can even be sublime, but I would never get to the worthwhile moments if I didn’t first churn out a lot of dreck.

When I was working on my dissertation, which was my first book-length writing project, someone recommended I read How to Write Your Dissertation in Fifteen Minutes a Day. It’s not often that a book changes your life, but that book changed mine. Some of the skills the author conveys there are applicable only to academic writing, but many of them are universal, including how to manage your time, break down a project into manageable chunks, keep track of your progress, write a for-your-eyes-only “zero draft,” and end each day by “parking on the downhill slope.” That last one in particular has been revolutionary. One of the reasons I would struggle with writer’s block and procrastination is that I’d try to finish a whole section in a day’s work, and then begin a new section the next day. But it was so very difficult to get started on a new section that I would put it off interminably and try to do just about anything but write. (My house was really clean back then, for example.) Parking on the downhill slope means that you stop in the middle of a thought, a paragraph, or even a sentence so it’s that much easier to get back into the swing of things the following day. When I am writing now I aim for 1,000 words a day, and when I’ve hit it I make myself stop no matter where I am.

Matt: I enjoy the variety of people and faith perspectives represented at Flunking Sainthood (and that you don’t mind controversy). One blogger challenged: “The problem can be put very simply: (1) few people who aren’t Mormon have much to say about Mormonism, and (2) there aren’t too many Mormons hanging around the Beliefnet site” — did you perceive this as a challenge starting out and do you ever get any pushback from your faith tradition (or from people of other faith traditions)?

Jana:Well, strangely, my Mormon posts are often the most heavily trafficked things I write for Beliefnet. I was surprised by this myself. In the beginning I only blogged about Mormonism because Beliefnet asked me to, so I set up a schedule whereby I’d cover LDS topics once a week (Mondays) and then spend the other days conducting author interviews, commenting on religious trends, reviewing books, and doing a Friday Twible commentary for my ongoing Twitter Bible project. (http://twitter.com/janariess)

I think the blogger quoted above is actually wrong on both counts. Plenty of people who aren’t Mormon have lots to say about Mormonism (some of which is inaccurate) and plenty of Mormons hang out at the site. My Beliefnet editor thinks the traffic is high for my Mormon posts because it’s an underserved audience and Mormons are hungry to be taken seriously in the mainstream media.

As for pushback, oh yeah! I have definitely angered a lot of people. I wrote a post last summer in which I said that sacrament meeting (the main Mormon weekly worship) was boring, and that got some people riled up. (http://blog.beliefnet.com/flunkingsainthood/2010/07/five-reasons-why-mormon-church-meetings-are-the-dullest-youll-find-anywhere.html) And in the fall I publicly disagreed with some deeply homophobic comments made by LDS Apostle Boyd K. Packer. (http://blog.beliefnet.com/flunkingsainthood/2010/10/lds-apostle-boyd-k-packer-is-wrong-about-homosexuality.html) Open disagreement with a high-ranking church leader is in my mind very healthy for a vibrant religious organization, but it’s rare in Mormonism to see a church member who is active in the church and has a strong testimony calling an apostle to task. I stopped reading the comments after about the first fifty, but it’s clear that a whole portion of Mormondom would love to consign me to hell if only we happened to believe in that doctrine.