Doug Pagitt is a very busy man. He is an author, speaker, head pastor of Solomon’s Porch in South Minneapolis, host of his own popular radio show described as “religious radio that’s not quite right”, and he is also co-founder of an event and social media company. I am sure I might be leaving out a job or two, but those who know Doug will tell you 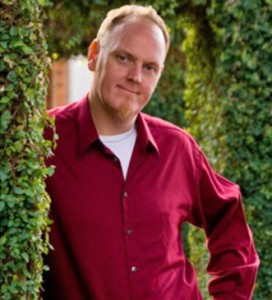 he approaches each of these ventures with a consistent and contagious passion and energy. One of the founding (and highly respected) members of the Emergent movement, Doug is currently travelling and speaking about his new book, Church in the Inventive Age. While Doug does not shy away from controversy, he is (in my estimation) one of the more engaging and entertaining voices in the American Christian conversation. I had the pleasure ofbeing a guest on Doug’spopular radio program last fall — and in one of the funnier moments of my book tour, he challenged me (on live radio) if I knew anyone other than librarians who had read To Kill a Mockingbird! The interview turned out to be quite enjoyable. I have been drawn to Doug’s work; he is a truly creative mind and a powerful communicator with a good sense of humor. I encourage you to learn more about Doug by visiting his website here: http://dougpagitt.com/

Doug Pagitt describes Church in the Inventive Age as “a fast-paced, big-idea, thought-provoking invitation for churches to be full participants in a cultural age where creativity, participation and inclusion are the norm.” He continues that “this book is designed as a conversation starter for professional and lay church leaders who know that something important is happening in our culture that creates fresh, exciting opportunities for Christianity in our world.” In the last 200 years, American culture has moved 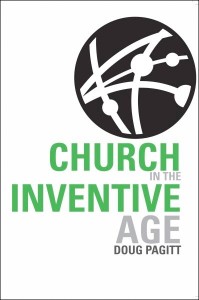 through three distinct ages—the Agrarian Age, theIndustrial Age, and theInformation Age—and is heavily engaged in a fourth—an era Doug Pagitt calls theInventive Age. If you are a church leader, pastor, or layperson that cares about the health of the 21st century church, and are open to the relevance of embracing change – this book will matter to you. (You can purchase Church in the Inventive Age by clicking on the book-cover).

I recently had the chance to interview Doug about faith, good reads, his radio show and his newest book.Hope you enjoy”Five Good Answers” with Doug Pagitt:

Matt: How has writing Church in the Inventive Age changed your faith perspective?

Doug: I have been thinking about the issues that I write about in Church in the Inventive Age since I was a freshman in college, which was also the start of my life in Christianity. – Especially the stuff about the culture and the four elements – Thoughts, Values, Aesthetics and Tools.

So, writing this book felt like I finally said what I had been thinking for so many years. It was relief to get it out.

And, I really like the book. I like my other 5 books as well, but I think I would have bought this book and liked it even if I hadn’t written it.

I think it has changed the way I will write books in the future. It is a short, fast read book. I really like that. I am thinking about writing a bunch of books that say 20,000 words (a standard book is 60-75,000). Maybe 3 a year, instead of one longer book.

Most people I know don’t read books at all, and those who do read often don’t finish them. So, shorter books might have a place in helping ideas spread. I think a book is a delivery system for an idea or an experience. My books tend to be non-fiction idea delivery systems. So, we ought to make books that fit the idea instead of stuffing books into a container (or in this case stretching them into the container).

CIA has helped me to see that and trust that idea.

Matt: What is your favorite novel?

Doug: The Devil in the White City. It’s an historical fiction novel. It tells the story of the 1893 World’s Fair in Chicago and intertwines the true story of the architect behind the fair and a serial killer who used the fair to lure his victims to their death in his elaborately constructed “Murder Castle”.

I like it as much for its narrative of the 1890’s, of which I’m quite enthralled as for the Dexter-like nature of the killer.

Matt: How has hosting a radio show changed you as a person (perspectives, experience, and faith outlook)?

Doug: Thanks for asking about my radio show. I love doing it. I am looking to expand it to a daily show (you know 2 hours once a week is just not enough). I like that the show provides a place for me to talk about religion and faith and science and health and spirituality in a public context. Religion tends to be stuck in closed systems of conversation, and that is a dangerous thing.

My show is on a politically progressive station in the Twin Cities and most people who listen to the station are hard-left democrats and feel that religion is either a non-factor or the problem in the world. So, talking about a hope-filled, open-armed, alive and well faith in that context is really fun. And I think, important.

An unanticipated benefit is the chance I have to talk to such interesting people. Because it is a radio show people are willing to come on and pitch their book or project whom I would otherwise never have a chance to talk with. So, the show opens those avenues.

And, I like having to think about my conversation of faith in the public square. As an evangelist (to use a traditional Christian word) I feel alive when talking to real people in situations that are not scripted.

Matt: Who is one person you would love to have on your show but haven’t?

Doug: I really want to have Ken Silva on my show. You may not know Ken but he is someone who warns the readers of his website that I’m a false teacher and wolf in sheep’s clothing. Most every day he writes something about me being a heretic or something of that sort. So, you might wonder why I want to have him on my show. I think it is crucial to personally engage with anyone who takes the time that Ken does to read my stuff and listen to what I say and to respond to it. Now, I think his interpretation of me is way off, but it is crucial to not only listen to and talk to those who agree and tolerate you, but it is crucial to be in relationship with those whom you disagree.

I try to make a practice of not holding an opinion about topics on which I don’t have a friend who disagrees. Having Ken on my show would help fulfill that desire.

Ken on the other hand has no interest in that kind of relationship and refuses to talk to me publicly. So, that seems to be that. For now.

Matt: What is the biggest paradigm shift in your thinking about faith (in the last ten years)?

Doug: I think literacy is the biggest thing to happen to religion in the last hundred years

Now (in the last 75 years) for the first time in human history religion is practiced by people who are literate. I think this changes everything. We are just coming to the grips with it. Now so many options and understandings are available – not only because of the internet but because ordinary people can read. The issue is not producing information that people need; it is choosing what information is important and will be authoritative for us and our community.

The printing press was great advent, but a US population with 99% literacy changes everything.

Next week’s Five Good Answers features a conversation with a prominent author, professor, self-proclaimed agnostic, (and a good friend) to discuss his experience with the church and his views on the Christian faith. I think those of you with a church background will find his answers fascinating…