Would a younger Atticus have changed the story?

Leave a Comment on Would a younger Atticus have changed the story?

“The Parable of Atticus Finch” was one of the more engaging chapters to write because it allowed me to dive in and examine the attributes of the character that, for many, is the reason they love To Kill a Mockingbird. 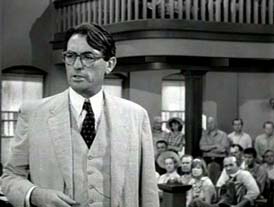 Exploring Atticus helped me to realize how much faith was a guiding force in his actions. He tells his daughter Scout that he couldn’t go to church and worship God if he didn’t defend Tom Robinson. Another of my favorite authors, Stephen King, has said thatwhen creates a character and is frequently surprised by what they “choose” to do as his writing of a story unfolds, so I often wonder how differently Lee’s novel might have played out if her Atticus had been written as a much younger character. Scout comments (or laments) many times in the novel about Atticus’ age…

I am sure the moral convictions that led Atticus totake the Robinson casewere always there, so I suspect even a young Atticus would’ve found himself defending Tom. But there are other parts of the plot that might have been different. I wonder if a youthful Atticus would’ve had the wisdom, patience, and perspective to handle conflict the way he did. How would a younger father have responded to Mrs. Dubose’s taunting of his children? Would a younger man have taken a gun to defend Tom from the lynch mob? Could a young Atticus have had the self-control to walk away from Bob Ewell spitting in his face and threatening him in hope and understanding that it might save Bob’s daughter from another beating? Might he have had thecompassion to respond because his neighbors needed him, even though their actions were despicable? Would he have comprehended the power of connection to change people? Would a younger father have instructed his daughter to remember that no matter how bad things would get, the people of Maycomb were still to be treated like neighbors?

Age certainly doesn’t alwaysequate towisdom, but when you find true wisdom, it usually seems to have some age. It is interesting to think about what a

younger Atticus might have done differently. I came across this story on CNN about a movement of Baby Boomers entering seminary and was reminded of my question about Atticus and his wisdom: http://religion.blogs.cnn.com/2011/02/13/baby-boomers-flood-seminaries/?hpt=C2

I am grateful that people with some life under their belts are setting out on a course to share that experience with others. I thought of the influence some of this wisdom will have on younger ministerial students sitting in those classes. We certainly bring our personal life experiences to every story we encounter. After I read this piece, I thought specifically of Atticus and Mrs. Dubose. I wondered if a younger Atticus would’ve grasped the opportunity to teach his children about the meaning of true courage through such an unlikable character. Would a young man have seen enough life to fathom the meaning of what Mrs. Dubose was trying to accomplish before she died? I wonder if he could’ve understood that the actions of our neighbors are determined by their life experiences, choices, relationships, and too often afflictions that we can’t see. Certainly, there are other sides to the discussion of Baby Boomers crowding into the seminaries — what do you think?