1 Comment on Interview with author and podcaster Nick Fiedler

I had the opportunity to be a guest on Nick Fiedler’s podcast last fall to promote The Mockingbird Parables. I enjoyed theconversation immensely. Nick and I share anEnglish background, and the laid-back format of the podcast was a stark contrast to most of the interviews I conducted. As I looked through his list of guests, I discovered that we had similar interests and so I became a subscriber and have listened to Nick and his friend Josh ever since.

After the interview, I also had the chance to read his book, The Hopeful Skeptic: Revisiting Christianity from the Outside. 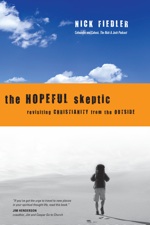 His honest, yet respectful, dialogue about faith and doubt is inspiring. Nick, who spent some time working in a church, takes a step outside his “arranged marriage” with Christianity to wrestle with his questions about Jesus, the Bible, the church and prayer.I found the charm of Skeptic in Nick’s thoughtfulness about his own experiences, and the ease with which he draws you into his journey. In a world of books on faith written by mega-church pastors, you will be captured by Nick’s ability to communicate with the written word…he is truly a gifted writer.

The Hopeful Skeptic is an enjoyable read and one of the most candid books about the life of faith that I have picked up in the last few years. I had to disagree with one reviewer who labeled Nick’s book “the skeptic’s survival guide.” I think The Hopeful Skeptic offers an honest model of how to question, doubt, and believe; in some ways, it disrobes the conventions of an American Christianity that too often have little to do with faith. I highly recommend you pick up a copy of The Hopeful Skeptic here: http://www.amazon.com/Hopeful-Skeptic-Revisiting-Christianity-Outside/dp/0830837272

Nick’s primary focus is his award-winning podcast. The “Nick and Josh Podcast” is an experiment in podcast media to bring conversations with authors, speakers, musicians, church leaders, theologians, artisans, and bloggers to your iPod or computer.

In a few short years, Nick and Josh havemanaged to grow their podcast to over 250,000 subscribers with no money, a couple of Macs,and a little bit of attitude.

Check out the Nick and Josh Podcast here: http://thenickandjoshpodcast.com/

I recently had an opportunity to sit down and talk with Nick about faith, the church, and his Podcast. I think you will enjoy his “Five Good Answers”:

Matt: What prompted you and Josh to begin your podcast — when did you guys begin to realize how many people were tuning in?

Nick: In 2003, Josh Brown and I were twenty-something church workers hanging around Youth Specialty Conventions while dealing with our own questions about Church, the Bible, and Christianity. In the hallways of those conventions and on websites like The Ooze we started to find conversations from people who were bucking against the traditionalist Christian mindset. We started reading books from people that were showing up on these online forums and at the conventions and we would try to sit down with them and have conversations. The problem was everyone else at these conferences had the same idea. Thousands of people were in the same boat we were. They were working at churches not knowing if they could still work at churches with integrity because their worldviews were drastically changing.

Since Josh and I couldn’t get time to sit down with these speakers and authors in person we figured we would leverage our technical advantage and get in contact with them to ask for an interview about their newest books. We went to a couple individuals first (Doug Pagitt and Brian Mclaren), but then we just went to publishers and asked for books and interviews. We couldn’t meet with these people at a busy conference, but we could get them on the phone. So we did, and we recorded it. Then we put up the recordings for anyone to hear. We first hosted it on a small server that crashed in the first week because of the number of downloads. Then we eventually had to make it to a paid service to take care of the bandwidth. We could tell we weren’t the only people interested in these conversations.

Matt: Why do you think the podcast resonates with so many?

Nick:I don’t think we did anything special with the podcast. We definitely don’t have the highest audio quality or the best intro and outro music, and sometimes our pre-interview banter boarders on offensive, but I think we created something that people were looking for.

Most of the people we interview, at least the higher profile people, have a typical interview script. They have their book promo material and their lecture material. By getting these people on the phone and making it seem like a natural conversation we can disarm those sometimes and create a conversation that we get to steer.

I think that’s why people like the podcast and why it took off. It is like you are sitting on the phone with the people we are talking to. You can hear the crackle of the phone line, the unnatural pauses, and everything that you could imagine on a phone call.

In addition to the overall feel of the podcast, we also started it at just the right time. Just when the Emergent Village was cropping up online in the US, and when there weren’t very many progressive Christian podcasts out there.

Matt: What disheartens you right now about the Christian faith?

Nick: The thing that eats away at me the most about the Christian faith is that it is full of some of the best people in the world that don’t feel that they can scrutinize their governing structure. The faith has a control over many people that don’t let them apply the same thought processes to their spiritual life that they would in any other important part of their life. I understand I am moving into generalizations, but I think they are supported at large.

If a priest molests someone, they need to go to jail. If the higher ups protect the priest, they should go to jail. If the CEO of your religion covers that up, he should go to jail. No questions. No debates. The structure of the church should be shaken. If you are part of a religion that has historically been against homosexuality, you should find out why and question the way that you treat homosexuals. If you are concerned about the literalness of the Bible you should take every bit of knowledge out there and hash it out with your pastor. These are things the Christian church has to throw itself into in order to contain a loving religion that is not stuck in the medieval ages. The only way this happens is by giving pushback to the tops of the church. This can be done in very relational and healthy ways, but things must bubble up from the laity to the clergy.

Some places embody this freeness. A lot don’t. Obedience is seen as a Christian trait that becomes translated, “following your church’s teachings’. I would like to see a lot more dialogue in the Christian church and a whole lot more acceptance of those people asking the really hard questions. It’s nothing new, but it hasn’t been too long since this questioning was known as heresy. The best turn the church could take in the next 50 years would be to let the deepest darkest questions and fears out of the hearts and minds of the congregants and into the material of the sermon and to fight for equal rights of every human being (gay, straight, male, female, American or foreigner).

It’s happening in some places. And it’s messy. But I don’t feel the Christian church members are confident enough to stand up for themselves and their neighbors. I think they need to. And it disheartens me when I see places that stop them before they can start. I should again emphasize that I do see this in many communities, but I see those communities as the exception and my hope is that the church produces more of these communities.

Matt: What has been the most significant change in your perspective or on your journey since the writing of The Hopeful Skeptic?

Nick: The Hopeful Skeptic was a summation of my journey in spirituality from my earliest memories up until my first full year out of the church community. Being part of a Christian family and working for a church, the biggest change after writing it would have to be my perspective on the community I left.

When I wrote The Hopeful Skeptic I had just left the church community, but a lot of the half-life of that community was still present. Now it’s been almost 3 years since I started writing it (and 4 years outside of the church) and I feel like I am freed of the emotional connection to the church community. I don’t mean that in a negative way, I just mean that now I feel like I am an outsider and I can look at churches and Christianity from an outside perspective. This can be scary, because on the inside you know things need to be changed, but you are trying your best to move people and situations in the right direction. On the outside you know things immediately need to be changed and you wrestle with pulling people out of churches that are hurtful to them or that contain bad theology.

My friends that are atheists sometimes are more eager to pull people out of churches to save them from hurtful theology. I never had that urge, I always wanted to be an inside reformer. Since writing The Hopeful Skeptic, there have been some times where I have been more like my atheist friends and wanted the destruction of places that are harmful more than the reformation. Places that treat the LGBT community as second-class citizens, or places that are against social justice, or places that have an absolutist angle on God. I see myself moving away from the hope of reformation for certain institutions.

There are ideals in the teachings of Jesus that I will never loose hope in, but since writing The Hopeful Skeptic, I have felt more skeptical of the Christian community at large. That is my biggest shift and struggle.

Matt: Can you tell us a little about where you think the podcast is going and where you would like to go next with your writing?

Nick: So I don’t want to leave the interview on that last question because I felt that it was darker, but I am wrestling with that aspect right now, and I want people that read The Hopeful Skeptic to know when I say that we change all the time, I refer to myself first and foremost.

This question is more positive. I am excited about continuing the podcast. We are working in 2011 to try to get back to a weekly podcast, letting us get a lot more content out to the listeners.

We also hope to have more political, musical, and non-religious interviews to broaden the discussion a little bit. There will be some functions we record as well.

The direction will shift, as it has been for the last year, away from the ‘big names’ and more on to ‘names we want you to know about’. Now that doesn’t mean we won’t have big names on there, but we don’t want that to be the focus. We still want to challenge people and introduce people to new thoughts and thinkers.

As Josh finishes up his M. Div., I am sure he will continue to bring along his theological knowledge as I bring my quirky skepticism and love of total deconstruction. 2011 should be a fun year for the podcast.

One thought on “Interview with author and podcaster Nick Fiedler”