Paste Music Magazine, in a survey conducted by both writers and artists, listed Bill Mallonee as #65 in their “100 Greatest Living Songwriters Poll.” Mallonee, the lyrical and musical source behind the late Vigilantes of Love, started playing music in Athens in 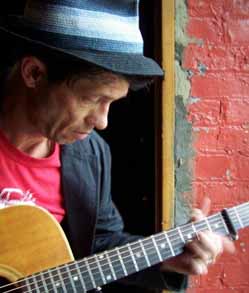 the late 80’s. From 1995 until about 2002, Bill toured the country with his band performing 180 shows a year, amassing critical acclaim and creating passionate followers with his dynamic live performances. The “4- guys-in-a-van-with-no-safety-net-beneath-us” dynamic of life on the road left a profound imprint on Mallonee’s way of looking at his life…and is deeply woven in the sound and feel of his Americana music. Bill is currently focusing on the solo artist gig. He’s back to being, in his own words, “just a guy from a college band from Athens, GA.” He’s overa dozenalbums into his solo career (he’s been doing about 2 a year since 2002), touring and performing with his wife, keyboardist and vocalist, Muriah Rose. You can find out more about Bill and his music here: http://volsounds.com/

I first saw Bill play at a Cornerstone music festival show in the early 1990’s, as he toured supportingthe record “The Killing Floor.” I was taken with his passion, his energy, and his profound songwriting. I have followed Bill Mallonee’s musical journey closely ever since. Bill and I share an affinity for the works of Frederick Buechner and the music of Neil Young. As much as I enjoy Bill’s musical talents, he also ranks among my favorite writers. His lyrics are accessible, moving, heartfelt, and penned with an infectious honesty. Needless to say, it was an honor for me to talk with one of my favorite artists recently for “Five Good Answers.” As you can see in the conversation that follows (despite the five question motif), Bill did what those of us who enjoy his records and live performances are already used to…he delivered much more than expected. I think you’ll enjoy the conversation…

Matt: How has songwriting/traveling journey changed you as a person over the years and/or impacted your faith?

Bill: I think being locked in a van with 3 other juveniles;) put me in a place where all the normal “safety nets,” so to speak, that one counts on in life were removed. It makes you write a different kind of song. There is a difference between heartfelt influence vs. slavish imitation. I think after 15 albums over 10 years “out there,” I knew what was “my voice” as opposed to someone else’s.I (and VoL) had lots of critical acclaim, but it was the adversity and poverty I encountered that became huge catalysts for me becoming very immersed and comfortable with the Americana genre. I think being thrown together in a van with few resources other than myband-mates& my faith in God, meant that something unique was likely to emerge. Vigilantes of Love was always proudly a college/indie band. I tell younger artists all the time: “the only story you can really tell is your own, not someone else’s.”One of my mild gripes these days is that I hear so much emerging Americana music and I can tell exactly what’s on the artists’ iPod…

Matt: What is the best book you have read in the last year?

Bill: Great question: I like Ronald Rolheiser’s “The Holy Longing.” It’s the most sober book on spirituality I’ve ever read. He’s a Catholic priest and very acquainted with Thomas Merton’s work. My “fav” author hands down, is Frederick Buechner. “The Hungering Dark,” or “Godric” is a great place to start. You’ll not be disappointed!

Matt: You have sustained such a passion for songwriting for a number of years now – what excites you, motivates you, and supplies you with the energy to keep writing new music?

Bill: Well, a few things: I’ve been at this 20 years now. So, it’s all those sobering and august life experiences, you know…it’s all a learning curve. We pray to grow in grace and wisdom, and some of that wisdom is a kind of “hard” wisdom – you learn to let go of things.You learn to grieve all that got lost or perhaps was never born in your own life.Above all, you learn to accept the fact we’re all very fractured, stumbling exhibits of human beings. So, you learn to extend forgiveness all the way around…even to yourself, which is so very important.You learn to rejoice in the small things. I believe God’s extends His love to us in countless ways, mostly small. A good friend, a good conversation, a smile, a note of encouragement from someone, daily sustenance. That’s why it’s good to surround ourselves with good community and good art…It helps us on the journey.Age is a grace. You start to see things differently. Illusions finally give themselves up for what they are. Things I was chasing turned out to not be so glamorous.Also, I’ve lost a lot of friends along the way at this point. Death, one’s own mortality, is something you start to sense daily. It’s all a storm, sometimes a bitter one. That’s where I’m going with this answer, I guess. You begin to really see God’s friendship showing up in the midst of the storm. Forgive me for playing the sage here, but that’s the stuff that still excites me whenever I pick up a guitar. It’s what I love to hear in songs.

Matt: Looking back at your career, which of your records would you choose as your favorite and why?

Bill: Oh, very tough question…All of them were needful writings to get me past a particular point or crisis in my life.At 25 albums and 9 EPs and hundreds of other tunes…Lord, it’s hard to say.

“Killing Floor,” “Welcome to Struggleville,” ” Blister Soul,” “Audible Sigh,” are the usual suspects among fans and they are solid albums.But, I think “Roof of the Sky,” “Locket Full of Moonlight,” “Dear Life/Friendly Fire,” get notoriously overlooked. Those were very dark and brooding records.”Summershine” & “Perfumed Letter” were real noisy folk-rock band albums. Those two were certainly my most ambitious albums, sound-wise. Real hooky songs, lots of jangle and good choruses are what we were going for.All of the Works (in) Progress Administration (WPA) EPs are the bestI’vedone lyrically. I’m up to 9 of them now. They’re earthier musically. Plus, I get to play all the guitar parts on those, so my ear for what makes a cool secondary part has improved a lot, I think.

Still hard to single any out!

Matt: What artist or writer has had the biggest influence on your song writing?

Frederick Buechener, I guess. His way of seeing humanity is something that has made a profound impression on me.

I love Neil Young’s sound. Love his character voice. Don’t think we’re remotely close in terms of themes, though. I just love the rough-hewn sorta sound he gets acoustically or when he’s full-bore electric…transcendent! I learned all the bridge banging on the guitar from watching him.

Matt: What is the most exciting thing you see happening in music these days?

I love them. Rock, old school jazz, classical…their tone and presence is lovely.You feel like you’re “there.”Our labels never let us release real vinyl, BUT, I’m proud that VoL got to record almost all of its work on two-inch tape vs. digital. I hear the difference.

Matt: What does the writing process look like for you? Has your approach to it changed over the years?

Bill: No, not really. When we had a deal for a few records in the 90’s, I use to make sure I wrote a few “radio friendly rockers” for each album, so the guys at the label could work the album to national radio with some authority. I hardly ever edit very much; if the song shows up, it’s usually very quickly and done with. Even songs I’m noted for like “Resplendent,” “Skin,” “Parting Shot,” all showed up very fast. I wish I could say I know what the variables were for that, but I don’t. I just try to be ready. Keep it simple, honest and clear is my motto. When writing, if a song won’t “give itself up” quickly, you’re probably forcing it. But, usually when I pick up a guitar, something comes out. I’m lucky, I guess.I usually keep a daily journal of lyrics whenever I tour. Muriah likes driving so I get plenty of time to write from the passenger side.Up ’till about 2004, I was good for about 50-75 songs a year. I’ve slowed down a bit to about 30 a year, now. I do like privacy, but since Muriah and I live in a one-room casita (adobe house) now, that’s a lil’ harder to come by. So she gets to hear all the stumbles and shambles as I write. Poor girl! But, she’s a great writer herself, so I know she’ll have a good idea of what’s working and whatisn’t. So it’s all a good thing.These days, it’s just a guitar, a cup of coffee and a blank page in front of me. Straight to my Zoom H-4 recorder…simple and clean.

Matt: Over the years, I have observed that few songwriters evoke such deep feelings of loyalty and connection with their listeners as you do; what are your thoughts on this?

Bill: First off,I’venever written with a particular audience in mind. I tell folks: “I picked up a guitar to save myself.” I think that’s true. There was so much fractured in my life as a kid growing up that maybe only a guitar and a blank notebook were the ways to make sense of it all.But follow me: we’re all living in the same skin. That means there are certain emotions that are deeply rooted and common to us all. That’s the place to draw from.So I think with my fans, it comes down to those themes. Given what I touch on and how I go about saying it there seems to be a lot of identification and resonance going on. That’s very humbling. I guess I’m a confessional writer, maybe even a religious writer in the broader sense of that word. When it comes to popular music, I feel that there is no one genre or approach that’s for everybody. I just do what I do and hope there’s someone to listen. So far so good, I suppose!

Matt: What is something other than songwriting and music that you are passionate about (maybe something that few people know)?

Bill: 1. Still passionate about my two sons. They’re older now, but wow! Who could ask for more? You get to bring a life into the world and be part of their nurture and growth. And even then, it’s all surprise after surprise. I’ve been lucky. My two sons have been a joy. 2. Well, for years I was a distance runner. It keeps you outdoors and I find it’s a very contemplative pursuit. Recently, I’ve gotten into cycling. Equally wonderful, less harsh on the body and the scenery changes faster.3. And being able to tour has allowed me to see just how beautiful and vast this country is. I’ve seen some glorious vistas. The last two summers, Muriah and I have planned tours around visiting the National Parks. It was inspired in part by the Ken Burn series on the National Parks and all that went into their creation and protection. A great series. Living in New Mexico has afforded us an incredible chance to see some of the most beautiful land we’ve ever seen. Pretty inspiring for the song-writer as well!

Check back next week for my interview with author and podcaster, Nick Feidler. His program, “The Nick and Josh Podcast”, interviews writers, speakers and artists from across the religious spectrum that are impacting our culture. The podcast has over 100,000 listeners and engages listeners in a conversational, yet extremely honest, look at faith.